Ankita Katdare · Oct 8, 2015
Rank A1 - PRO
It seems that the India office of Google Inc has kept its Google Maps team busy for bringing a solution to the problems of daily commuters in Delhi. The company has released a new app on Google Play Store titled 'Delhi Public Transport Offline' that lets the user search for bus or Delhi Metro directions and timetables without the use of mobile internet data. Not just that, the app has a feature for notifying you if and when there is going to be a delay in the arrival or departure. The Android app is completely free for download and is going to be a boon for New Delhi residents to get around on public transit. There are a plethora of other privately built apps that offer similar features such as NextBus Delhi, Ridlr, Delhi Metro Navigation etc. With Google India stepping in the ring, the competition is just going to be get fiercer. 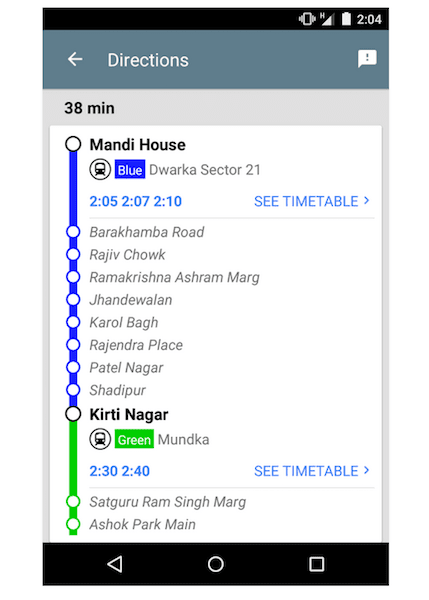 Delhi Public Transport Offline App - Screenshot
​
The company has made it clear that this is an experimental app and is currently gathering feedback from the users so that it can edit or modify its features on the go. So far so good, the app has received 150+ positive 5 star ratings and users are appreciating the lightweight app. (It's just 1 MB in size).

Among the major features of the app, there is Route planning and directions for Delhi Metro and bus. Users can get directions to any DMRC metro station, DTC bus, Gurgaon Rapid Metro and DIMTS Orange buses. Then there is a way of getting notified about major Metro delays beforehand.

Users can also search schedules and timings for a particular Bus Number of Delhi Metro Line. All of this works offline and doesn't require mobile data usage.

The app has a prominently placed 'Feedback' button on the top that can be used to lodge your complaints or the features you love so that the Google Maps team working on this project can take appropriate actions.

Statistics suggest that more than 2.5 million people ride on the Delhi Metro. The presence of such an app and the fact that it works on offline mode is going to work well with the daily commuters. What are your thoughts about the new Delhi Public Transport app? Share with us in comments below.