Ankita Katdare · Nov 21, 2015
Rank A1 - PRO
Gionee India is all geared up for the launch of its all new Marathon series smartphones at an event in Bangalore scheduled for November 24th. Called 'Gionee Marathon M5', this phone just like its brothers has the USP as its huge battery. The company is boasting off the phone's battery life to be up to 4 days and has also introduced a new 'extreme mode' that boosts the standby time at 5% the existing battery life, making the phone's power last up to 62 hours. More on the battery later, but first let's come down to the phone's expected pricing and technical specifications. 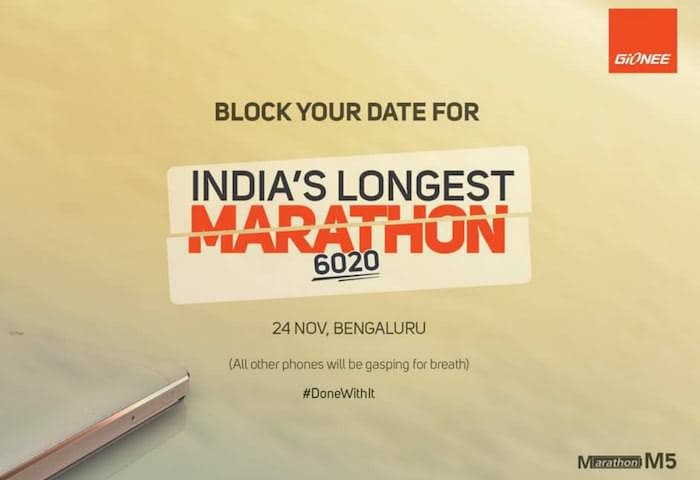 ​
Coming with Android 5.1 Lollipop OS out of the box, the Gionee Marathon M5 features a 1.5 GHz, 64-bit MediaTek Quad Core chip at its heart. There's 2 GB RAM to drive the user's processing needs. An inbuilt 16 GB memory can be expanded up to 128 GB via microSD support.

On the smartphone's rear end, we find a 13 megapixel camera, whereas on the front there's a 5 megapixel selfie snapper. Both camera support HD video recording capability.

Coming back to the phone's battery - there's a dual battery setup inside the device i.e. it packs two batteries of 3010 mAh capacity each, giving it a total capacity of 6020 mAh. With the presence of dual charging chips, users can charge both batteries at the same time.

The Marathon M5 also sports reverse charging technology that lets the user use his or her smartphone as a power bank so that you can charge other devices on its power.

More about the phone will be revealed at Marathon M5's upcoming launch on Nov 24. Stay tuned for updates on this and meanwhile let us know what are your thoughts about Gionee's latest Android device in town.