Ankita Katdare · Dec 24, 2014
Rank A1 - PRO
If you thought that Firefox OS smartphones are supposed to be cheap, here's a latest unveil by Mozilla Corp and KDDI in Japan that is sure to baffle you. Called Fx0, the new smartphone running the Firefox operating system has been officially launched in Japan just before Christmas. Going on sale tomorrow i.e. on December 25, the Fx0 smartphone is the first high-spec phone from the company featuring the latest Firefox OS update out-of-the-box. What makes the phone royal and far from the common man's reach is it's design. Tokujin Yoshioka, the world-class Japanese artist has designed the Fx0 smartphone to incorporate Mozilla's mission statement of freedom, openness and transparency in the new gadget.

Alongside the support for the latest technologies including WebRTC, NFC and 4G LTE, the Fx0 Firefox OS smartphone comes with a transparent design (as you can see from the picture below), such that the user can see the battery, SIM card holder, camera and everything under the hood on both the rear and front panel. 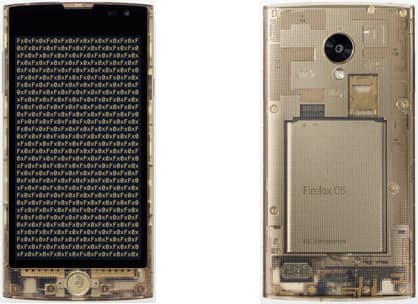 Among all the Firefox OS powered smartphones we've covered so far, this is going to be the most expensive one. Only available in Japan as of now, the Fx0 is said to be priced at JPY 50000, which is approx. $414 or Rs, 26,300. What are your thoughts on the new transparent design and the basic set of specifications? Would you be ready to shell out Rs. 25K+ if it launches in India? Share with us in comments below.

Divyaprakash KC · Dec 24, 2014
Rank C2 - EXPERT
A phone that can't run candy crush saga does not have much chance succeeding in India IMHO. The 'specs' too is like "better alternatives available in cheaper price". Ecosystem is the key to survival of any phone in here, 'specs' next and then price. If released in this price, I think this phone will meet the same fate of Jolla Sailfish.

A few couple of enthusiasts may buy this. Rest , not much chance.
1 Like

Divyaprakash
If released in this price, I think this phone will meet the same fate of Jolla Sailfish.

What if I tell you that Jolla Sailfish can really run Candy crush & plenty other famous/well-known Android apps ??
1 Like

Abhishek Rawal
What if I tell you that Jolla Sailfish can really run Candy crush & plenty other famous/well-known Android apps ??

Then that knowledge must be made known to a lot many of us. I am all for alternative mobile platforms. Love Sailfish, firefox and BlackBerry 10. I personally think Sailfish is the Che Guevara of mobile OSs. The real rebel.

Well, are you asking me if I buy Jolla? Very tempting. But my first target is BlackBerry Passport!
0 Likes

Divyaprakash
Well, are you asking me if I buy Jolla? Very tempting. But my first target is BlackBerry Passport!

Well, to each his own.
0 Likes