@Ankita Katdare • 17 Mar, 2014
Facebook has released a new version of its app for the Windows Phone platform. The social networking giant has delivered a lot of performance improvements with the Facebook Beta 5.2.3.1 update. These include - Faster notifications, Redesigned primary and secondary tiles and Messaging platform. Facebook feels that there is still room for bugs and has appealed the audience to help them find more as they head towards a more stable release. To send the company a feedback about the app's features, users can log in the details through Settings > Feedback in the app.

Facebook for Android and Facebook for iOS has been around for a long time. On the Windows Phone Store, users can download the 9 MB file if they have a smartphone or tablet running on Windows Phone 8, 8.1 or 7.5. Along with the aforementioned features, the Facebook app brings Toasts for Facebook chat and support for additional languages (total 52) including Japanese, Deutsch and Hindi. 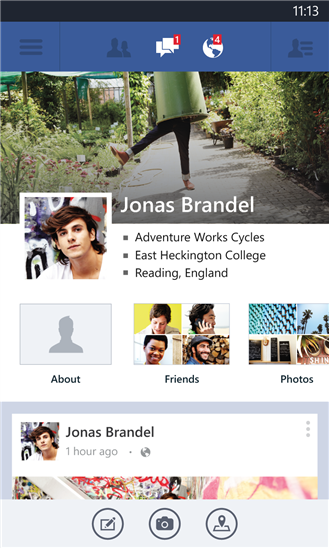 ​
Are you an avid Windows Phone user? Have you been waiting for a stable Facebook app for too long? How do you like the latest release with Facebook Beta 5.2.3.1? Download the app here and let us know your reviews through comments.

​
@Rajni Jain • 18 Mar, 2014 I updated the Facebook on my Lumia series phone, and couldn't find the latest updated software better then the previous version Facebook.

FB at facebook is still slower then the version installed on android; Notifications are a bit delayed; UI looks better in android device. It feels like still it will take a while when FB @ windows phones will come closer to FB @ Android and Idevices.