Rucha Wankhede · Feb 10, 2016
Rank C1 - EXPERT
A team at University of California, San Diego have 3D-printed a tissue that closely mimics the human liver’s function and physiology. It might be closest we have yet come to develop the real thing - a diverse combination of liver cells and supporting cells systematically organised in a hexagonal pattern. The engineered tissue is a functioning liver specimen with the potential of reproducing a dual blood supply with different pressures and chemical constituents, thus providing unprecedented understanding of the complex coupling between circulation and metabolic functions of the liver in health and disease, Prof Shu Chien, author of the study from Medicine and Bioengineering was quoted as saying.

Images of the 3D-printed parts of the biomimetic liver tissue
​
The existing models so far lack both the complex micro-architecture and diverse cell makeup of a real liver, and the organ being critical for determining how body metabolizes drugs and produces key proteins, is difficult to mimic.

With the help of a novel bioprinting technology the liver tissue was printed in two steps. First, the team printed a honeycomb hexagon pattern, each containing liver cells derived from human induced pluripotent stem cells. The cells being derived from patient’s skin cells; did not need to be extracted from the liver tissue. In the next step, endothelial and mesenchymal supporting cells were printed in the spaces between the stem-cell-containing hexagons. 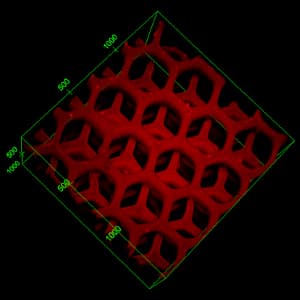 3D-printed device uses nanoparticles to trap pore-forming toxins that can damage cellular membranes
​
Over the tests, the liver tissue was able to perform various liver functions, such as albumin secretion and urea production, for longer periods of time also expressing a relatively higher level of a key enzyme that’s considered to be involved in metabolizing many of the drugs administered to patients. The entire structure - a 3 × 3 millimeter square, 200 micrometers thick - takes just seconds to print.

The realistic model could prove to be a great drug screening tool for pharmaceutical companies, saving time and money when developing new drugs. It can also be used to reproduce in vitro disease models such as hepatitis, cirrhosis, and cancer and for evaluating the efficacy of drug therapies.

The work was published in the online early edition of Proceedings of the National Academy of Sciences.