Ankita Katdare · Jan 22, 2014
Rank A1 - PRO
E-Whiskers or Electronic whiskers developed by researchers from the Berkeley Lab and the University of California Berkeley are next in line to make robots smarter. Taking a step ahead in the nanotechnology arena, the team has developed highly tactile sensors just like a cat's whiskers that can be used by robots to feel the environment they're in. Earlier we have seen electronic skin and how wearable electronics is the newly tapped arena for researchers. With these new whisker-like sensors that are created from high-aspect elastic fibres painted with composite films of carbon nanotubes and silver nanoparticles, California University team has been able to make the whiskers sensitive to mechanical strain. In fact, their results show that these "e-whiskers" have been able to respond to even the smallest of pressures. For example - placing a bank note upon a table.

"In tests, these whiskers were ten times more sensitive to pressure than all previously reported capacitive or resistive pressure sensors," says Ali Javey, a faculty scientist in Berkeley Lab’s Materials Sciences Division and a UC Berkeley professor of electrical engineering and computer science - and a lead author of the paper published in the journal PNAS today. Javey and his team (Co-authors are Kuniharu Takei, Zhibin Yu, Maxwell Zheng, Hiroki Ota and Toshitake Takahashi) have been involved in some time in developing flexible, sensitive materials based on biomimcry, including artificial "e-skin" for robotic limbs.

​
A great application for e-wishers shall be in helping robots with their spatial awareness, giving them the ability to accurately map their environment by sensing nearby objects. Though one can't really strap these whiskers on one's face, if put into the wearable technology gadget segment, these can be used to acutely monitor and measure heartbeat and pulse. What do you think about the "E-Whiskers"? Share your thoughts with us in comments below.

Ankita Katdare · Jan 22, 2014
Rank A1 - PRO
In the following picture, you can see an array of seven vertically placed e-whiskers that were used for 3D mapping of the wind by Ali Javey and his group. Take a look - 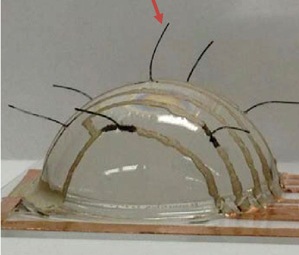 Inviting comments from electronics engineers in the community.
0 Likes