@Ankita Katdare • 29 Apr, 2014 • 1 like
What this young researcher from Vanderbilt University has achieved can make it possible to develop nanowires way thinner than human hair using electron beams. Junhao Lin, A Ph.D. student at the University and a visiting scientist at ORNL (Oak Ridge National Laboratory) has become successful at creating the world's smallest nanowires by focusing electron beams that are only three atoms wide. These ultra flexible metallic wires are as thin as 1 / 1000th the width of the microscopic wires that we use in ICs today to connect the transistors. This means that it will now be possible to develop electronic circuits of the thinnest form factor possible.

The researchers has developed these small wires using a special family of semiconducting materials named transition-metal dichalcogenides (TMDCs) that tend to naturally form monolayers. The element used from this family is - "molybdenum disulfide" - popularly used as a solid lubricant. It is interesting to note there that researchers from across the world have already been successful in creating flash memory gates and functional transistors using these TMDC materials. It is now a matter of time when the wires, which are the next most important components of a circuit are developed with these materials too. Junhao made use of scanning transmission electron microscope (STEM) to focus the beam of electrons down to a width of half an angstrom (about half the size of an atom) with exquisite precision. 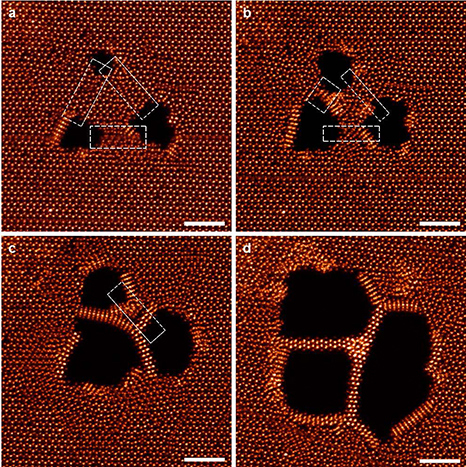 Series of still scanning electron micrographs (a to d) show how the electron beam is used to create nanowires. (Junhao Lin / Vanderbilt)​
Researchers have been intrigued by the atomic monolayers for quite some time now, owing to the fact that they are highly flexible, transparent, bear exceptional strength and possess high electron mobility. Even though Graphene looks like a promising solution ever since its arrival in 2004 - most scientists haven't been able to put it into functionalization mode.

If all goes as planned and we let our imagination go wild, the researchers have empowered us to look at a future where tablets and television displays are as thin as a sheet of paper that you can roll up and stuff in your pocket. The scientist behind this fascinating work - Lin also envisions that the new technique may also make creating 3D circuits by stacking monolayers “like Lego blocks” possible by having the electron beams fabricate the wires that connect these layers.

For now, the research work has found its place in the journal Nature Nanotechnology published on April 28. Do take a look at the following video -


​
What are your thoughts on nanowires and electronic circuits becoming ridiculously small with each passing year? Share with us in comments below.

OPPO Mobile India is here with the new iteration of their old smartphone by launching the OPPO Neo 3, a Dual SIM Android phone that's priced at Rs. 10,990. The...
5.1k views
Read More →
Archives

hi, can some one give me ideas or topics for my final year project in computer engineering about any upcoming technology over which i can work for my project.
15.6k views
Read More →
Archives

Help me out to study .... Which is the Best book to study Basics of Mechanical Engineering
3.3k views
Read More →
Archives

Nikesh Garera comes from a strong background in computer science engineering. Having did his graduation from University of Mumbai (B.E.) in the year 2002, he went on to pursue M.S....
3.5k views
Read More →
Archives

How to install IIS on windows XP with and without CD