Satya Swaroop Dash · Sep 3, 2014
Rank A3 - PRO
Whether you are a student or a working professional living in a big city chances are you spend at least an hour a day commuting from your house to your destination on public transport such as buses or trains. The trouble with public transport is that most of the times it takes you vaguely near the desired location and you have to walk the rest of the distance. The makers of Movpak call it the “last mile problem” and have made their product to solve just that. Movpak is not just a backpack with an electric skateboard but it can also transform into a two wheel upright luggage. The electric skateboard can be driven by the user using its wireless controller. Its makers claim that it takes two hours to charge the battery on the vehicle and it gives you 9 miles (14.5 km) of range. On the Movpak you can travel at 15mph/22kmph. 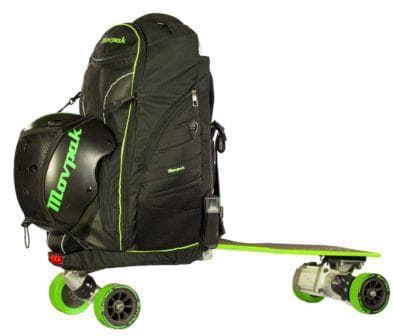 ​
The rechargeable battery inside the Movpak can also be used to charge your smartphones and tablets. If you get bored of the initial backpack, you can easily swap it for a new one of your choice. The project is seeking crowd-funding on Kickstarter and has set of goal of $100,000 to be fulfilled within October 10. Even though the Movpak seems cool, we are not sure about its mass market appeal because of the following reasons. First the Movpak by itself weighs 17 pounds or 7.7 kg. Once you add your belongings the weight can easily go up to 10kgs or more. Second, the minimum pledge amount that gets you one Movpak is $1,190 or 71,948 rupees and frankly that is way too much money to spend on something that helps you avoid your daily walk which is quite beneficial for your health.

Source: Movpak and Kickstarter via TechCrunch Posted in: #Coffee Room
1 Like
@ A2A Reply