@Ankita Katdare • 31 Jul, 2014 • 1 like
The possibility of converting carbon dioxide into fuel is as applause worthy as it is the need of the hour. Scientists from all over the world are working on developing alternative fuel options. The team of researchers from University of Illinois at Chicago is one such that to have brought forward an interesting experiment with results that can bring a revolution in the way we look at fuel generation. They have synthesized a catalyst that has made possible the conversion of waste carbon dioxide into syngas, a precursor of gasoline and other products that are rich in energy. There are certain existing systems sitting in labs, but this catalyst could be the determining factor of how the process can be brought to commercial use in near future.

Along with his team, Prof. Amin Salehi-Khojin, from the mechanical and industrial engineering department at UI developed a two-step catalytic process using molybdenum disulfide and an ionic liquid to “reduce” or transfer electrons, to CO2 in a chemical reaction. The great thing about this catalyst is that it replaces costly metals such as silver or gold used in the reduction reaction and thus makes the process cheaper and more efficient. 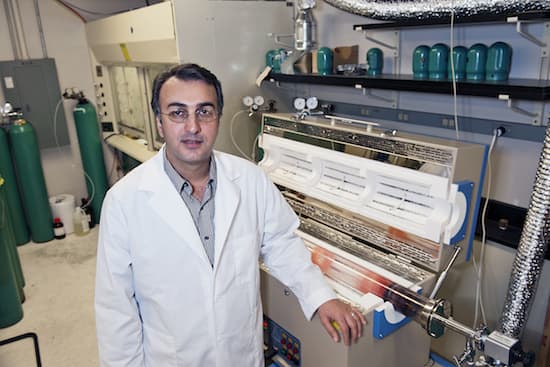 Prof. Amin Salehi-Khojin at UIC​
Without the necessity of a secondary gasification process, the team has been able to reduce CO2 to Syngas in a reaction that can last for hours. In similar systems in existence today, the only reaction product is carbon monoxide. The Syngas produced here is a mixture of carbon monoxide and hydrogen. Unlike Graphene, here the need of playing with the chemistry of molybdenum disulfide is avoided, and the catalytic activity is on the edges, instead of crystal structure, which is the case of gold and silver.

Moreover, the new catalyst can easily manipulate the proportion of carbon monoxide to hydrogen in the syngas produced. The team is now working on taking their innovation out of the labs into the real arena of the practical world applications. Conversion of a waste gas like carbon dioxide to produce an alternative source of energy at large-scale is not only eco-friendly but the call of the nature. We would like to know your thoughts on the new process. Share your thoughts in comments.

Source: University of Illinois Chicago
@Ramani Aswath • 31 Jul, 2014 As far as I know a catalyst can only speed up a reaction that would otherwise be slow or not happening because of the high activation energy needed. The products of reaction will be at a lower energy level than the enrgy level of the reactants.
Carbon dioxide results from carbon combining with oxygen with release of energy. The thermodynamics is inviolate. To get the reverse reaction to take place (that is getting carbon from carbon dioxide) exactly the same amount of energy must be supplied.

What must be happening is that the researchers were able to get a catalyst that does this conversion with supply of energy (probably solar or some other low grade available energy) at a reaasonable rate.

In effect "There is no free lunch".

Here is an article on this work:
https://www.theengineer.co.uk/energy...erts-carbon-dioxide-into-fuel/1019016.article

There is no mention of supplied energy in this article. I shall update when I find it.
@Ramani Aswath • 31 Jul, 2014 • 1 like Bingo.
It is an electrochemical reaction at high current density and low overpotential.
What this implies is that carbon dioxide is converted into precrsor fuels in an electrochemical cell, where the energy of conversion is given by the electricity used.
https://www.nature.com/ncomms/2014/140730/ncomms5470/full/ncomms5470.html
7.8k views

Project Abstract / Summary : The Idea of Sharing Battery power in Mobile phones just like Easy-Going Bluetooth modules is novice and not widely implemented. Here we Provide with a...
3.3k views
Read More →
Archives

How to earn money from EBIZ?

i want to know about EBIZ ..how we can earn money from this?how it will work.. please can anyone help me i in this ragard this
10.6k views
Read More →
Archives

Difference between load and resistor

We know that a resistor can be considered as a load. Now the question is, if we increase the resistance according to ohm's law V = IR, the current must...
12.8k views
Read More →
Archives