@Ankita Katdare • 12 Sep, 2014 • 1 like
Another new Android phone under Rs. 10,000 in India is here from Celkon Mobiles called the 'Celkon Millenium Ultra Q500'. Running on the latest version of Android the 4.4 KitKat OS, the Celkon Ultra Q500 is priced in India at Rs. 9999 for early birds. The specifications list of the Dual SIM phone lists the processor as Quad-core 1.2 GHz (Broadcomm BCM 23550 SOC) with 2 GB RAM and 16 GB internal memory and 12 GB external memory which is expandable up to 32 GB via microSD card. The biggest competitors to the Celkon Ultra Q500 phone are some of the latest phones like Moto E, Asus Zenfone 5, HTC Desire 210 and the upcoming Xiaomi Redmi Note. Celkon has tied up with Snapdeal to offer the phone exclusively through their portal.

The Celkon Ultra Q500 features a 5-inch screen with 1280 x 720 pixel resolution HD OGS IPS display. The primary camera on the phone is a 8MP on the rear and the secondary Camera is a 2MP on the front. The camera supports HD Video Recording, Panorama mode as well as Geo-tagging. Among the connectivity features - there's GPRS, EDGE, 3G, Wifi, USB Connectivity, microUSB, GPS and Bluetooth. 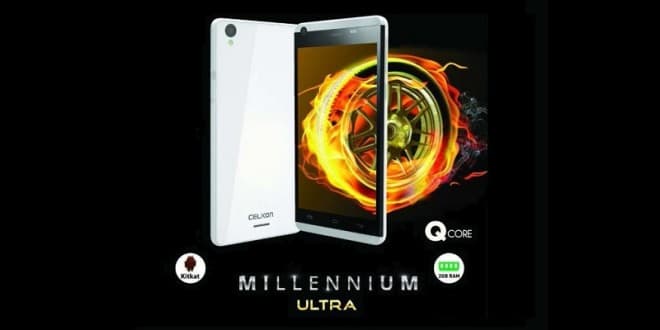 ​
The phone comes with a acrylic glass finish and the company claims that it is shatter resistant. Weighing at 149 g, the phone comes with a Li-Ion 2500mAh battery that offers a Talk Time up to 5 hours and Standby Time up to 200 hours. The G-Sensor, Proximity sensor, Light sensor are all in place and the video core 4 GPU makes sure users can play pre-loaded games such as Real Football 2014, Modern Combat 4 and Asphalt 7 without a hitch. It also comes with Hungama app for unlimited download of Videos and Music worth more than Rs. 1 lakh.

After Motorola initiated the trend of exclusive launch, most manufacturers have started tying up with e-commerce portals to launch their phones. Following the trend, Interested people can buy the smartphone from Snapdeal right away at an inaugural price of Rs. 9,999 against the regular price of Rs. 12,999.

What are your thoughts on the new Celkon Millenium series phones Ultra Q500? Share with us in comments below.
@vishal Lokhande • 12 Sep, 2014 • 1 like The phone looks dominant in specs...but I haven't see number of user using Celkon brand. The company hasn't prove his stand in India Market....😔. Well see if this new product will help them just like Moto G helps Motorola...👍. Will update performance of the gadget if I got chance to hands on it.
4.9k views

With an aim to deliver 100% genuine authorized spare parts to its customers, SparesHub.com was founded by Tapas Gupta in the year 2013. Spares Hub is based in Pune. It...
3.3k views
Read More →
Archives

A team of researchers from ORNL (Oak Ridge National Laboratory) of the Department of Energy has developed a new kind of unusual battery that can last as long as 10...
10.4k views
Read More →
Archives

What to do after Engineering? When you are failed in Final Exams.

Hello Everyone, I'm from Karnataka. I failed in final exams, means😀thumbdown:Have some backlogs). Also not got placement in any good company due Sensex like %age History. Can't stay in home,...
5.4k views
Read More →
Archives