Ankita Katdare · Apr 5, 2015
Rank A1 - PRO
If you have been following up with the recent trend in research work by engineers across the world, you might've noticed that 3D printing has become a common thread globally. People have started believing that making exact replicas of an object is now possible for any end user. It seems that Caltech researchers want to help you take a step further, by bringing the power of capturing high resolution 3D images to your smartphone. These 3D images can be sent to a 3D printer and the exact copy of your desired object will start forming in front of your eyes. The latest research work from Caltech University has spun out a new camera chip that lets a tiny high-resolution 3-D imager sit inside the comfort of your mobile device aka smartphone or tablet.

In the Caltech labs, Mr. Ali Hajimiri, the Thomas G. Myers Professor of Electrical Engineering in the Division of Engineering and Applied Science, together with his team have developed a small size, cheap new device known as a nano-photonic coherent imager (NCI) that uses a silicon chip (having size < 1 mm²) to come up with the highest depth measuring accuracy among its peers.

Different from the regular camera's images, whose pixels do not provide any data about the relative distance of the object from the camera, the new camera chip from Caltech has the capability of providing every pixel in the image with data about the distance as well as intensity of the object being captured. This data paves the way for clicking high-resolution 3D images from a smartphone's rear camera.

Using the well-established remote sensing technology known as LIDAR that measures distance by illuminating a target with a laser and analyzing the reflected light, the team setup an array of LIDAR units on their coherent imager to simultaneously capture different parts of an object or a scene. 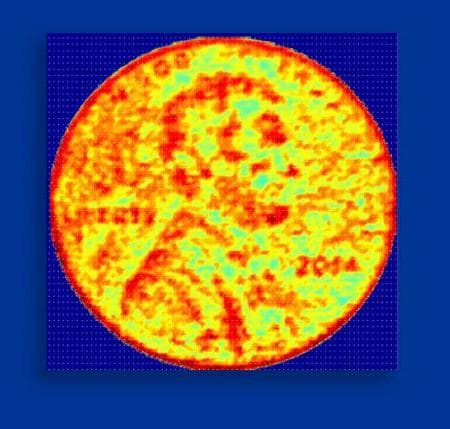 Caltech's NCI chip was used in a camera to capture the above 3D image which demonstrates the height of a US penny. The image was captured from ~ 1.5 feet away from the penny.​
The team owes their success with this 3D HD images to the optical concept known as 'coherence'. This property of light acts as a super precise ruler in the chip to measure the size of the object and the distance of each point on the object from the camera. This light is later converted into an electrical signal, which in turns creates the 3-dimensional image.

The 3D image, generated as a result of the first proof of concept of the NCI chip, produces only be 16 pixels at any given instance. However, the researchers also went on to develop a method for capturing larger objects in the camera by first imaging a 4 px X 4 px section, then moving the object in 4 px increments to image the next section.

The Caltech researchers are currently working on developing this technology further and are envisioning a future where large numbers of super-small LIDAR arrays pave the way for super precise 3D imaging, scanning and printing. The applications of such high-res 3D images are immense. Right from being able to detecting the slightest movements of a patient's eyes to helping avoid collisions in driverless cars and improving motion sensitivity in superfine human-machine interfaces to getting alerted on the minutest change in a sick person's heartbeat, the sky is the limit to put such a technology in real use.

What are your thoughts on the arrival of such a camera chip in everyday use? Let us know your opinions in comments below.