@Ankita Katdare • 14 May, 2013 • 6 likes
The only car that has been able to capture the news headlines over the past couple of weeks is the American Automaker's Car - Ford EcoSport. And since, as per Ford's Facebook Page, it is now official that the bookings for the EcoSport are going to begin in June, we have all reasons to find reasons why the car is worth buying. It is being talked about all over auto-car news blogs that the Ford EcoSport's launch date is expected in the month of June and the buyers would get the keys to this new ride by July. We all know that the price-conscious Indian market is already happy to see the price predictions of the car that lie in the range of INR 7-12 Lacs.

First and foremost feature that would capture your attention on the tech specs list of the EcoSport car is the 'EcoBoost engine' that, as Ford claims, will take the turbocharge and direct injection technologies found in advanced diesel engines and pushes them even further. So, EcoSport is featuring an advanced, compact petrol engine that will deliver power to rival a traditional 1.6L petrol engine but with 20% less fuel, thus rendering you and your car, both eco-friendly, whole churning out an incredible 122.5bhp output with maximum torque yield of 170Nm, which is expected to be at 1500rpm. This engine will run on the road upon the classy set of light-weight 16-inch alloy wheels.

Moreover, this urban SUV would be a great buy for someone who is looking to bridge the gap between a Sedan and a SUV. With plenty of space and height, Ford EcoSport has a robust look & agility just like the Renault Duster catering to your SUV needs, while it also delivers comfort of a SUV with all the clever technology. 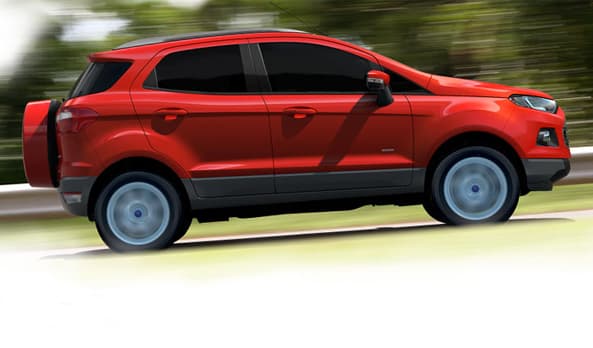 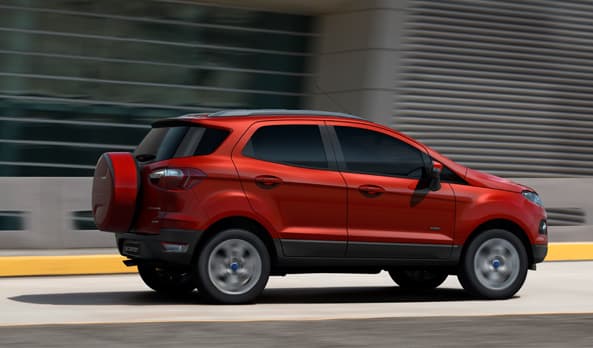 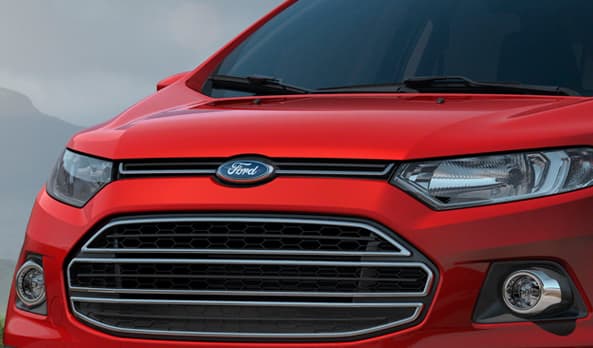 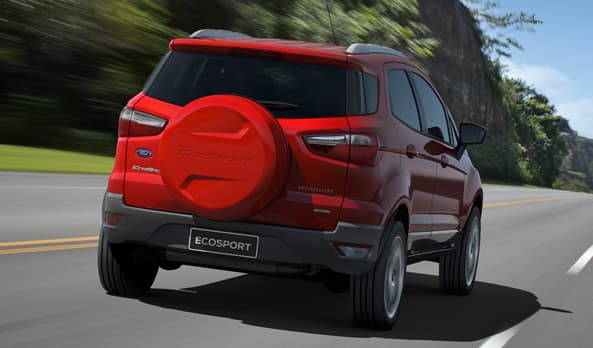 ​
​
Ford India can't resist to show off that it is soon going to be the first auto manufacturer in India to offer an emergency assistance system called 'SYNC' when it goes on sale in the country. This life-saver, vehicle-based, no-cost system will be of great help in case the passenger of the EcoSport faces an accident. This call-for-help system will send a critical voice message directly to emergency operators, indicating that a vehicle has been involved in an accident in which the airbags have been deployed or fuel pump shut off triggered and opens the line for hands-free communication. And this all is a one-time setup for the buyer. The company has made clear that there are no additional costs or subscriptions associated with the service.​
​
And when we list these features, we are just seeing the tip of the iceberg. There's just so more to see and experience with the EcoSport, be it CO2 emissions being out or the responsive power being in, we will soon be just counting reasons to buy the EcoSport. So, if the exteriors have been able to woo you with sturdy looks, you would be delighted to know that the interiors are equally refreshing. Though the plush insides are similar to that of the Ford Fiesta, we have comfortable seats that are covered with premium upholstery, a powerful air conditioning responsible for cooling (or heating) the entire cabin quickly, power windows, electric remote boot lid opener and an adjustable tilt power steering.​
​
So now, even though everything depends on the kind of a buyer you are, as a majority of the market is looking for an official announcement about the pricing, we think this car is going to be a pretty good hit on Indian roads. What is your say? Please share with us in comments.​
@Ankita Katdare • 17 May, 2013 Here is some news -
Ford India had organized a BIG media drive event for the EcoSport and during the event the EcoSport got involved in an accident. Though no one is injured in the mishap, but EcoSport's "Emergency Assistance System" as mentioned in the article above worked like a charm. Thanks to this feature, the ambulance arrived on the spot with medical help within a matter of just 5 minutes. 👍

PS: It feels like to show off this feature, the entire accident could have been planned and staged. Anyhow, the point has been proved, Ford!
@Kaustubh Katdare • 17 May, 2013 Ecosport will be officially 'launched' in India towards the end of June; Ford India's CEO has confirmed. The pricing would be directly in competition with the Duster. I checked the review on NDTV - looks like the ecoSport engine isn't 'very' powerful. But it should do the job - which people would expect from this car. I can't tell without test-driving the car myself 😀 .
@zaveri • 18 May, 2013 i would prefer the duster !
@Ankita Katdare • 27 May, 2013 As expected, the Ford EcoSport is now said to be launching on June 11. So, two weeks from now, you will ses the car to come in four trims - Ambiente, Trend, Titanium and Titanium Optional. The top-end variants which are powered by the 1.5-litre petrol engine will come with a six-speed automatic transmission, while the Ambiente and Trend will have the 5-speed manual transmission (MT). The base model of the EcoSport Ambient will lack safety features like ABS and airbags, but will have manual air conditioning, manual rear windows and Bluetooth audio system.

In current situation, I think it's better to wait for some more time and let the reviews flood in. I think EcoSport would prove to be a better choice in the longer run. Ecosport's already won the engine of the year 2013 award.
@D_G • 11 Jun, 2013 Did Ford started taking booking for ecosport
@D_G • 11 Jun, 2013

Ankita Katdare
As expected, the Ford EcoSport is now said to be launching on June 11. So, two weeks from now, you will ses the car to come in four trims - Ambiente, Trend, Titanium and Titanium Optional. The top-end variants which are powered by the 1.5-litre petrol engine will come with a six-speed automatic transmission, while the Ambiente and Trend will have the 5-speed manual transmission (MT). The base model of the EcoSport Ambient will lack safety features like ABS and airbags, but will have manual air conditioning, manual rear windows and Bluetooth audio system.

How is that news? Any one here planning to spend money on this drive?

Did they launced Ecosport yesterday??
@vikaskumar11233 • 20 Jun, 2013 The main reason behind this its price is scotch and in this range an SUV is set out or can say The passenger car made by the company which is getting positive response across the globe in all the markets, and the second reason behind this is merged with great performance packed fuel efficient engines, which are dependable and equipped with impressive aspects another reason its company has been provide it with glorifying colors which are common favorites.
So That its getting more response summation more in news.
@Sarathkumar Chandrasekaran • 26 Jun, 2013 THE WAIT IS OVER!!!!!!!!!!!!!!!!!!!!!!!!!!😁FORD ECOSPORT ON ROAD
🎉
NEWS FROM BUSINESS STANDARD
The revolutionary 1.0-litre EcoBoost is the first 1-litre engine to have been fitted in an SUV in India.EcoSport is the first in its segment to have Emergency assistance system.Ford EcoSports three Cs 'Compact, Contemporary and Capable'
Ford EcoSport's 1.0-litre turbo petrol engine with three-cylinders produces about 122bhp of power and 170Nm of flat torque.Turbocharger is what makes the car so powerful despite being a small displacement 1-litre engine.EcoSport will challenge both the B+ hatchback and Compact SUV.Ford EcoSport will be offered with 38 Accessories.And here comes the brand new Ford EcoSport. Ford finally puts an end to the wait and bring the super model to the stage. Pricing is yet to be announced.
#Ford EcoSport has been finally launced at an introductory price of Rs 5.59 lakh
#Ford EcoSport Pricing- Ambiente 1.5L Ti-VCT (MT Petrol)- Rs 5.59 lakh.
#Ambiente 1.5 TDCi (MT/Diesel)- 6.69 lakh
#Titanium 1.0L EcoBoost (MT/Petrol)- Rs 7.90 Lakh
#Titanium 1.5L TiVCT with Powershift (AT/Petrol)- Rs 8.45 lakh (all prices are ex-showroom, New Delhi)
#Ford EcoSport is available in 10 Variants across 4 trims, 3 engine options and 7 colours.
#FYI, the EcoSport will be made available in as much as 10 different variants with three engine options- 1.0-litre EcoBoost Petrol, 1.5-litre petrol and a 1.5-litre diesel engine. There will also be an automatic variant. The smallest yet most powerful and promising 1.0-litre EcoBoost engine powered version is likely to be priced the highest among all. Despite being a 3-cylinder, 1.0-litre engine, the EcoBoost promises to churn out the maximum power output of around 120bhp, 170Nm torque, while returning a superb fuel efficiency of around 18kmpl. Amazing isn’t it? The other two engines- 1.5L petrol and 1.5L diesel are the same doing their duty to the Ford’s flagship sedan Fiesta as well.
@Kaustubh Katdare • 26 Jun, 2013 I think the EcoSport will own the segment now. Pricing well done and I think Duster folks must be talking to their sales and marketing guys.
@Ankita Katdare • 12 Jul, 2013 And just we expected - Ford Ecosport has got 25000 bookings in just 17 days.

It is the best launch in Indian Motown’s history, and perhaps among the best in the haloed history of the American carmaker.
6.5k views

I was wondering if there's any way or hack to access whatsapp online via desktop or laptop. I've been told that one of the way is to install an Android...
110.1k views
Read More →
Archives

Hi all, could anyone please suggest me the best books for DBMS and SQL(for beginners or you can say introductory). counting on your replies!!!!
6k views
Read More →
Archives

Questions like these are normal in common competitive exams. They use just school level mathematics but used to measure someone's analyzing, reasoning & inferring capabilities. So give your head some...
6k views
Read More →
Archives

The mid-sized sedan, Baleno was discontinued in the year 2006-07. Soon after, it was replaced by the Maruti Suzuki SX4. It seems that the company hasn't been able to get...
4.6k views
Read More →
Archives

Raspberry Pi continues to be one of the most favoured DIY board around the world. I'd love to see all the interesting projects you are working on in your part...
7.6k views
Read More →
Channels
👨‍💻 Remote Jobs 🗞️ News 🚀 Founders Circuit 🗄️ Archives ✨ Newsletter 🕹️ Changelog
About · Privacy · Terms of Service · Contact Us · © 2005 - 2022 CrazyEngineers. All rights reserved.