Boeing Black - Do Its Features Make It One Secure Android Mobile Device?

@Ankita Katdare • 27 Feb, 2014 • 1 like
Boeing Black Smartphone has been launched with much aplomb. Developed with an idea to provide a solution to the U.S. Defense team's demands for secure and trusted access to the data being shared, Boeing Black is the first-ever self-destructing smartphone. Boeing, a company well-known for jetliners and fighter planes, has launched its phone with the name 'Black' signifying the phone's role in establishing modularity, security and productivity all rolled into a single device. Powered by Boeing's PureSecure architecture, the Boeing Black smartphone features a 4.3-inch qHD display with 540 x 960 pixels resolution. Deriving its power from a 1590 mAh lithium-ion battery, the phone weighs about 170g. Let us take a look at its specifications chart to dig deeper into the feature-packed phone.

Running on a 1.2 GHz ARM Cortex-A9 processor, the Boeing Black phone offers Dual SIM support and for connectivity, there's LTE, WCDMA, GSM, Bluetooth v2.1 + EDR-enabled connectivity to choose from. There's support for microSD card for memory expandability and among the ports you'll find micro USB, PDMI and a Modular 24-Pin Connector. The operating system is Android (version unspecified), but the camera features remain unknown. There's definitely a rear camera as seen in one of its picture. 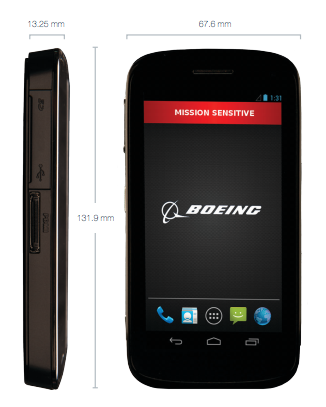 ​
Now, let us come to the security features - which have made the smartphone - a talk of the tech-town. As the tech specs list suggests, there's Embedded FIPS 140-2 Key Storage, Hardware Inhibits, Trusted Modules, and Configurable OS Security Policies built into the phone. Boeing has shared on its website that the phone will have epoxy around the casing with screws out-of-the-box. The phone is practically tamper-proof in case of an attempt being made to disassemble it. If an unethical user tries to open this casing, the entire data as well as the software will be erased to make the smartphone completely inoperable. This is what is being called the 'self-destruct' feature of Boeing Black.

Boeing has acquired a number of companies including Kestrel Enterprises Inc, Argon ST Inc, Digital Receiver Technology Inc, Ravenwing Inc, and Solutions Made Simple Inc. Teams from these companies along with Boeing's engineers have been working for about 36 months to develop the Black smartphone. The company did not reveal the pricing and availability details of the phone, but has shared that they have started selling it to potential customers.

With security concerns fast becoming the next-big-challenge for technology and electronics companies, in near future we are about to see a boom of advanced security options becoming a commoner in our specifications list. There are apps such as Telegram and Secret, which have become popular with the changing times and are being widely accepted, it is only a matter of time when major tech companies embrace consumer's security as a norm. What are your thoughts on that? Share with us in comments.

What is the difference between relay, switch and circuit breaker

hi 2 all and i have some general doubts pl ease clarify 1)explain the diff b/w relay ,switch and circuit breaker 2) give with real time practical examples for easily...
6.9k views
Read More →
Archives

Private Engineering College Vs. Government College - What should you choose?

First of all, let me be clear that this discussion is only for the students who are in 10+2 or those whose results are out and they have a 'choice'...
28.3k views
Read More →
Archives

Nine years back, Akshai Varde started the company called 'Vardenchi Motorcycles' with a team of 3 and Rs. 2 Lakhs in funds. His passionate attempt at the remodeling bikes business...
7.8k views
Read More →
Archives

Mozilla is back in news and we are as excited as the officials to explore the all new Mozilla Firefox 29. The new version of the popular open-source browser features...
7.2k views
Read More →
Channels
👨‍💻 Remote Jobs 🗞️ News 🚀 Founders Circuit 🗄️ Archives ✨ Newsletter 🕹️ Changelog
About · Privacy · Terms of Service · Contact Us · © 2005 - 2022 CrazyEngineers. All rights reserved.