Rucha Wankhede · Jan 14, 2016
Rank C1 - EXPERT
A new type of HLED (Hybrid light emitting diode) termed ‘BioLED’ developed by a team of German-Spanish scientists features protein cascade coatings in the form of rubber to make the LEDs glow. Drawing inspiration from nature’s bio-molecules the scientists developed this hybrid device which consists in introducing luminescent proteins into a polymer matrix to produce luminescent rubber. It uses luminescent proteins to convert the blue light emitted by a 'normal' LED into pure white light. The rubber was used to cover the LED to convert the light. 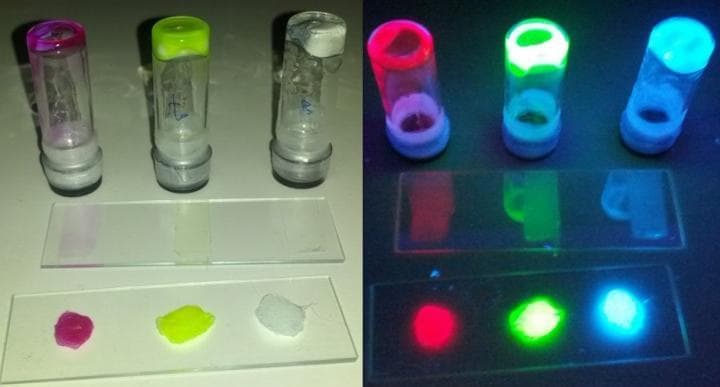 Given the stability and efficiency of LEDs over conventional incandescent bulbs, they are used widely world over. The manufacturing of these however involves inorganic components as such as cerium and yttrium which are already in short supply and hence won’t be sustainable for long.

The solution comes forth in the advent of this BioLEDs; which are easy to manufacture, are bio-degradable, and can be efficiently recycled and replaced. They also come with less than 10% loss in luminous efficiency for over 100 hours. 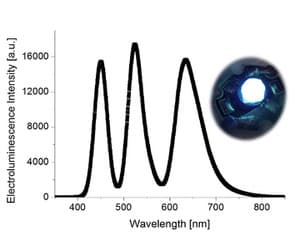 BioLED white light spectrum and picture, showing its quality when possessing a similar component for blue (emission at 450 nm), green (520 nm) and red (630 nm)​
With the traditional white LEDs lacking the red component, thus not being able to produce a light that is optimal for eye sight and psychologically affecting the individuals exposed to them for long periods of time, the discovery comes as a major break-through in optoelectronic devices.

Scientists are already working to optimize the thermal stability of the new material for longer operating times. They are also focusing on improving the chemical composition of the polymer matrix for enhanced performance, with the goal of making it easily available for commercial production.

The work was published in the journal Advanced Materials.