@Kaustubh Katdare • 18 Mar, 2014 • 3 likes
Chain slapping is one of the most annoying thing for every mountain biker. Until now, using a chain guide was one of the suggested methods to avoid chain 'slapping' the chainstay when riding over the bumps. It's however not very effective. On uneven pathways; the up and down motion of the rear wheel causes the chain to strike (aka slap) against the chainstay and produce annoying noises. Several mountain bikers have discussed the problem on various forums but haven't found a fix yet. It looks like the two-chain system developed by the team at Cycle Monkey will solve this problem forever.

The bike design team at Cycle Monkey has developed a dual-chain drive as a fix for the chain slapping problem. The first chain runs from the chainring mounted on the bike's chassis to the one mounted on the swing-arm gear. The second chain connects the second, intermediate gear to the rear wheel. Take a look at the following picture to get a clearer idea -

​
The system relies on the shared gear to solve the problem of chain slapping. There's no direct drive and the swingarm can freely move without causing the chain to hit the chainstay. Cycle Monkey has introduced the new system in Battleaxe; a bike it custom-designed for one of their customer. The price? Well, just $7000! Not a big price to pay to get rid of annoying sounds, right? 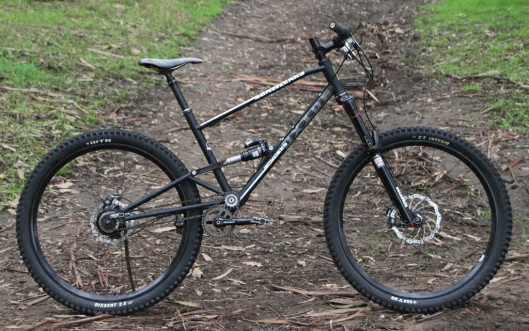