Bajaj Platina ES 2015 Mileage, Price and all that matters to Indians

Kaustubh Katdare · Mar 5, 2015
Rank A1 - PRO
Bajaj Auto has announced an updated version of its already popular motorcycle - 'Bajaj Platina 2015'. With the 96.9 kmpl mileage; Bajaj claims that the Platina is world's most fuel efficient motorcycle. Considering the price point of Rs. 44,507 (ex-showroom, Delhi); this new bike could just be the bike to grab - if you are out in the market to look for the bike that offers 'everything'. The mileage loving Indian motorcycle customers are likely to be impressed by what Bajaj's automobile engineers have cooked up in their garage.

The new Platina bike has been developed on a new platform with a brand new DTS-i engine. Bajaj's engineers have worked out an impressive balance between power and mileage. The bike also offers a refreshing and colorful color tones viz. 'Ebony Black', 'Electron Blue' and 'Candy Red'. The bike also features a new electric self-start. This sub-50k price (on-road price might be slightly higher than Rs. 50k) bike offers 102 cc, Single Cylinder, 2-valve, ETS-I with ExhausTEC technology patented by Bajaj Auto. The ExhausTEC is a special device that incorporates with the bike's exhaust system and helps build a negative pressure pulse at the exhaust valve. This allows sucking in more air-fuel mixture into the cylinder when the intake valve opens. The overall result is that the system produces higher torque and the rider does not have to shift the gear often; with the higher gears capable of allowing lower speeds.
​ 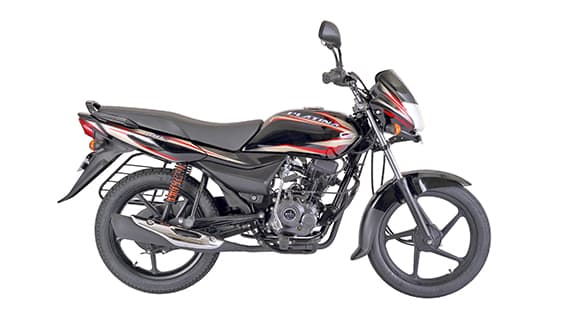 ​
The engine produces max power of 8.2 ps @ 7500 rpm. The top speed of the bike is capped at 90 Kmph and the user gets a 4-speed (all down) transmission. The bike allows comfortable ride with its suspensions. The bike has a fuel tank capacity of 11.5L; which means you won't have to frequent the petrol pumps often. Detailed technical specifications can be read on BajaAuto.com.

Do you think Bajaj Platina ES is the most attractive offering from Bajaj Auto; give the claimed mileage and price? Here's a comparison chart available on the official website. Looks like Bajaj Platina has been launched to fight with Hero's Splendor+, HF Delux, TVS Star Sport and Dream Yuga. Do let us know your thoughts.
​ 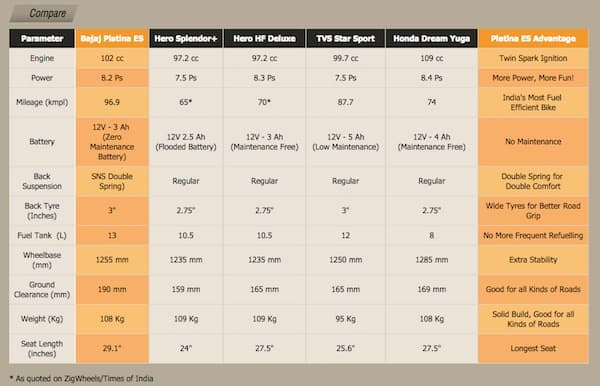 Sarathkumar Chandrasekaran · Mar 5, 2015
Rank A2 - PRO
What about its safety ?
Most of the parts like mudguard, and other covers that weigh less and would not withstand high speed accidents!!!
Other CEans view on it?
0 Likes

Karthikeyan jaisankar · Mar 16, 2015
Rank C3 - EXPERT
we can't compare safety with two wheeler or four wheeler because it depends on the vehicle cost.Even if you are buying a nano car how can expect safety?going to BMW bikes they are providing ABS system.Considering this bike,mileage and cost seems to be afford.But attraction or Design can be done little bit more!!!