Dhananjay Harkare · Feb 21, 2014
Rank C1 - EXPERT
Ever thought of artificial muscles made of fiber and sewing thread? Well, believe it or not, researchers have been successful in developing a new technology by twisting polythene and nylon into tight coils which look like rubber band. These coils could create artificial muscles that can contract and relax just like the real ones . The surprising part of the story is that these muscles are about 100 times stronger than human muscles.

A team led by University of Texas published a paper in US Science Journal describing the study of creating such muscles by twisting fiber material until they coil up. Twisting polymer converts it into torsional muscle and subsequent twisting creates lightweight and compact muscles. One of the team member also claimed that the process for creating such muscles is quite simple and have the ability of lifting loads 100 times that of human muscles can lift. The new muscles work on similar lines as that of human muscles. The polymer muscles can be electrically powered for some applications or by metal wires twisted along with muscles. However environmental temperature can also be used for contraction and relaxation of muscle. The team demonstrated the automatic opening and closing of windows with the help of self-powered muscles. 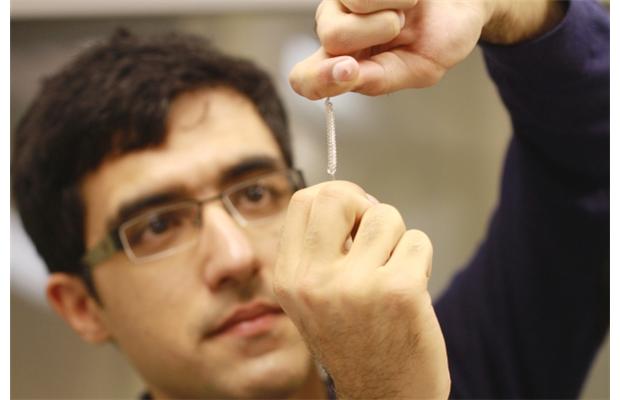 ​
The above image shows an artificial muscle less than a millimeter thick and capable of lifting two kilogram of load. The interesting fact is that this type of muscles created earlier used alloys of metals which costs about $3,000 per kilogram whereas the newly created muscles make use of material which costs only about $5 per kilogram. When compared to natural muscles, these muscles are not only stronger but can contract by 50% while on the other hand, human muscles can contract by only about 20%.

The University of B.C. Professor and bio-medical engineer said that just like every new technology, this would also need some time to evolve but will have many applications in near future. Dr. Ray Baughman, one of the corresponding author suggested that this could be used where superhuman strengths are required such as robots and exoskeletons. Also independently operated muscles can bring lifelike expressions to humanoid robots.

Share with us in comments your thoughts about the applications of these muscles.

Wonderful article and appreciate for all the research. Simple ideas can lead to the breathtaking solutions.

Well thank you. Read how another simple idea can be revolutionary.
1 Like