Airtel 4G In Delhi Coming Soon - Is Your Hardware Ready?

@Kaustubh Katdare • 06 Aug, 2013
Airtel is launching 4G services in Delhi in the next few weeks. According to telecomtiger, Huawei is most likely to handle the overall rollout plan, design, supply and deploy Airtel's 4G network services in Delhi. Airtel's 4G services are already operational in Kolkata, Bangalore, Pune, Chandigadh, Panchkula and Mohali. It's expected that post-Delhi launch, the next cities/states to get 4G from Airtel will be Mumbai, Kerala and Haryana. 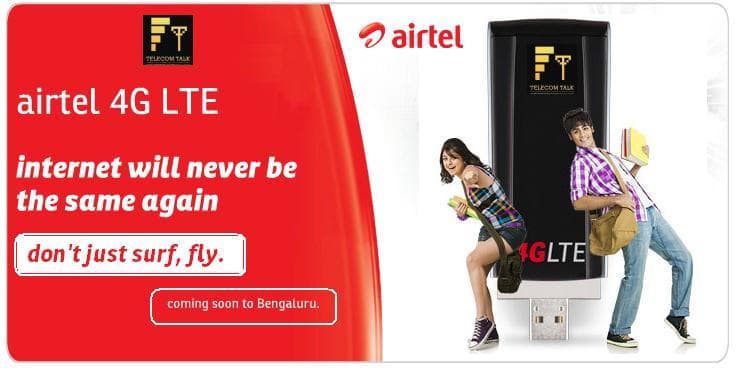 If you are excited about the launch, let us make you aware that capturing 4G signals will require you to have special hardware that can capture 4G. Thankfully, Airtel's already offering 4G dongle (4G LTE USB Modem) and 4G LTE Indoor Wireless Gateway.

Expect Airtel 4G rollout accelerating in coming days. Reason? The Big Bull Reliance is already taking faster steps towards all India rollout. Expect 4G wars in India starting next year. Stay tuned!
@Ankita Katdare • 07 Aug, 2013 Airtel 3G is BLOCKED! I don't understand this. How come they are making plans for 4G. The Supreme Court has stopped Bharti Airtel from extending intra-circle roaming (ICR) facility in 7 circles where it does not have spectrum. Bharti Airtel, Vodafone and Idea Cellular have been asked to pay penalties of Rs 350 crore, Rs 550 crore and Rs 300 crore respectively for providing the 3G facilities.

All the existing users of 3G are suffering from this. 👎
@Nayan Goenka • 07 Aug, 2013 Its funny because when I tried and called Airtel Customer Support for defect in 3g connections, they say,"Sir, we are currently upgrading to 4g network completely. So that is why we don't provide 3g to new customers any more." I mean WTF?
@Jeffrey Arulraj • 09 Aug, 2013 Suspending an existing facility to upgrade to the next big thing is not so wise at any time

4G are we ready nope We hardly have 100% 3G experience So forget 4G
@Anoop Mathew • 10 Aug, 2013 Well, I've not used 3G much, but the speeds were great through Airtel. Too bad they stopped it now. Hope that things work out for the best and I hope to log into 4G from my Note 2 soon.👍
@Sarathkumar Chandrasekaran • 10 Aug, 2013 One of the best providers in terms of network is Bharati Airtel but as Conqueror said it was not good to say goodbye to 3g and opting 4g while we havent utilized the benefits of 3g in full scale 😁
@Jeffrey Arulraj • 10 Aug, 2013

anoopthefriend
Well, I've not used 3G much, but the speeds were great through Airtel. Too bad they stopped it now. Hope that things work out for the best and I hope to log into 4G from my Note 2 soon.👍

Hope that is the case
3.6k views

i would like to know the best institute for microsoft.net training in hyderabad... i`ve heard of some institutes like - Naresh technologies - Deccan Soft - Peers tech - etc...
8.5k views
Read More →
Archives

Are Pressure Groups And Movements Healthy For Democracy?

The term Pressure Groups was coined in U.S. Pressure groups work to promote and defend their interests. They are not interested in capturing political power or contesting elections. Their aim...
8.3k views
Read More →
Archives

Weighing machines: what do they read ?

Mass and weight may sound the same thing, but they aren't. while mass is a scalar, which only is the quantity of substance in a body, weight is actually a...
5.5k views
Read More →
Channels
👨‍💻 Remote Jobs 🗞️ News 🚀 Founders Circuit 🗄️ Archives ✨ Newsletter 🕹️ Changelog
About · Privacy · Terms of Service · Contact Us · © 2005 - 2022 CrazyEngineers. All rights reserved.