@Ankita Katdare • 19 Sep, 2015
After NASA started calling for projects to invent habitats for Mars using 3D printing technologies, the French Design Firm 'Fabulous' couldn't resist coming up with their own design called SFERO - short for "Sphere, Iron and Water". The firm has worked diligently to showcase its expertise in 3D printing, architecture and space travel, even though the NASA Challenge is restricted to U.S. residents. The project Sfero makes use of Iron Oxide, the element found abundantly on the Red Planet (thanks to the studies made on the rocks and dust samples by NASA's Pathfinder rovers - Opportunity and Curiosity. Iron was chosen as the raw material for 3D printing the habitat on Mars. 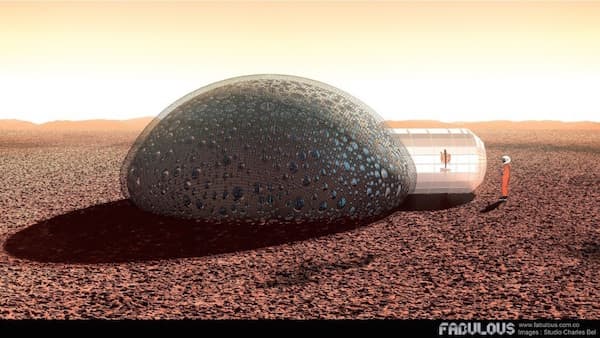 ​
Another element found on Mars is water, which would serve as the protective covering in the human habitat on the planet. A water pocket will be inserted between two iron hulls (which will facilitate protection against solar radiation, and transparency to grow plants in the habitat's biosphere.

Sfero will also work as the construction robot for itself. A mast will be considered as the core element of this design. Drilled into the ground (aka Martian soil), this central pole will act as the pillar and ensures the shelter's durability and resistance.

The objective of this pole will be to seek the permafrost that will be liquefied for feeding the aqueous pocket as well as having two robotic arms. One for sucking and sorting the material to extract the iron, and the other for laser melting and deposition manufacturing.

3D printing or additive manufacturing technology will involve building parts of the house by placing layers of material on top of each other. The robotic arm equipped with a 3D print head will be used for large-scale metal printing.

The design of the house will be a dome-shaped structure inspired from the geodesic domes introduced by the American architect Richard Fuller. Sfero's architecture is based on a complete sphere, the lower half of which protected inhabitants from outside elements, such as the aforementioned solar radiation. Sfero shelters will be so designed that they can be customised for each mission in accordance with the astronauts' individual needs such as number of floors or windows or furniture. 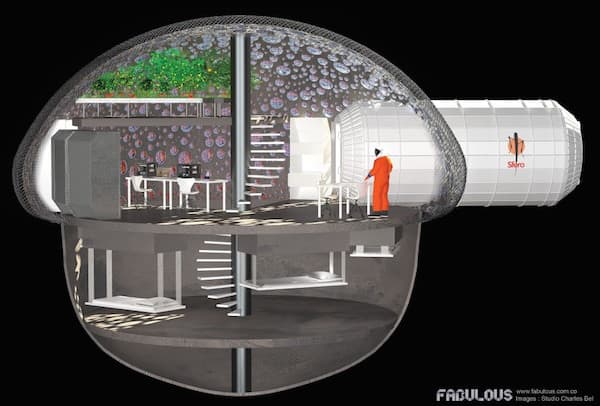 ​
The interior is layered using iron additive manufacturing with everyday items such as beds, tables, chairs, walls, floors, closets, bulkheads etc. being built at the same time as the shells, working upwards from the bottom of the mast set in the ground to the summit. The partitions inside the habitat can be moved around, dismantled or turned into work surfaces. These partitions will make it easy to adapt to the environment inside the shelter and make for easy loading and unloading during missions.

Coming to the landing area or the place where these habitats will be built - the French firm belives that it's crucial to set up the base in one of the lowest areas on the planet in order to take full advantage of the decrease in velocity when entering the atmosphere and having a thicker atmosphere at the end of the run.

There are several other considerations such as average pressure, climatic conditions to be less harsh, presence of the elements required for construction and so on and so forth. Therefore, the team chose the 93-mile wide Gale crater where the Curiosity rover landed as it's located at the equator and the area is rich with iron oxide stratum and it is said that the crater may have been underwater at one point. Other than that, similar conditions can be found in the Hawaian volcanic rocks and Mojave Desert in California and hence it is possible today to manufacture a prototype Sfero on Earth and this would serve as the training ground for further research.

What are your thoughts about building a habitat for astronauts on Mars using 3D printing technologies - A 3d-printed home away from home? Share with us in comments below.

ShopClues is an online retail website founded in 2011 by Sanjay Sethi and Sandeep Aggarwal. Founded in the Silicon Valley - USA, ShopClues is now headquartered in Gurgaon, India. An...
10.1k views
Read More →
Archives

Need advice: To join C-DAC or not? & Information about C-DAC NOIDA

HI friends have you heard of the institute" C-DAC" in India which offers PG Diploma course in embedded .VLSI and other software courses? I know that C-DAC Hyderabad is very...
21.7k views
Read More →
Archives

What is the best topic for me to do a project?i am doin diploma last year in mechanical engineering?

please suggest me something for my project,mi am not getting any idea...???
7.3k views
Read More →
Channels
👨‍💻 Remote Jobs 🗞️ News 🚀 Founders Circuit 🗄️ Archives ✨ Newsletter 🕹️ Changelog
About · Privacy · Terms of Service · Contact Us · © 2005 - 2022 CrazyEngineers. All rights reserved.