Ankita Katdare · Apr 24, 2015
Rank A1 - PRO
Moto 360 Metal Band variant is finally here. Priced at Rs. 19,999, the beautiful smartwatch has gone on sale via Flipkart. To match the user's style quotient, Motorola put a lot of efforts in coming up with different kinds of straps for its iconic Moto 360 smartwatch. It's various bands - Metallic, Leather, DODO Leather, and TYLT Silicone have been quite popular across countries. Now in India, priced at Rs. 2000 higher than the basic Moto 360 (Grey Colour), the Metal Band version is going to be a special for all Android Wear enthusiasts in India. No matter how we look at it, we have to admit that the more classical tastes of Indian buyers are better met with the metallic Moto 360 watch [Silver Version] that you see in the image below. Let's take a quick look at its features. 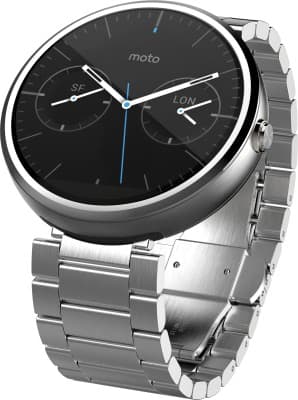 ​
In the metal band variant, the Moto 360 has links made of solid stainless steel, delivering durability and the highest quality and the butterfly clasp complements a modern, contemporary, tri-link design.

That's all about the timepiece that there's to know. A few months back, we had a discussion about the arrival of Moto 360 in India and whether or not people thought it was too pricey. Smartwatches are in trend and only time will tell if this one makes it mark in India or not.

What are your thoughts about the arrival of the brand new Moto 360 Metal Band in India? Share with us in comments below.

Ramani Aswath · Apr 24, 2015
Rank A1 - PRO
I prefer to measure my own pulse on the wrist arteries. Pedometer is for cultures where walking is considered an exercise. As for time keeping my preference is for the good old hand wound watch. (I have a few). I also have a slew of battery powered analog ones. Stopped wearing watches two three years back.
The higher the moto is priced greater is the money that I have saved by not buying it. Like a person running behind a taxi saves more money than by running behind a bus.
1 Like

Ankita Katdare · Apr 25, 2015
Rank A1 - PRO
A lot of my friends in IT are buying *smartwatches* because it is the new cool. Wearable devices could reach common man's home because of the arrival of smartwatches. Personally, I think I won't buy unless they do more. Else, for Rs. 20,000, one can get a decent phablet, a powerful tablet, a basic desktop and what not.
0 Likes