Sharvari Panchbhai · Dec 4, 2014
Rank C2 - EXPERT
A team of biomedical engineers from Washington University in St. Louis has invented a two-dimensional camera by using Compressed Ultrafast Photography (CUP) technology developed at School of Engineering & Applied Science. According to Lihong Wang, the head of the team and eminent Professor of Biomedical Engineering, this newly developed camera is the world’s fastest ‘receive-only’ 2-D camera. The novel device can capture events up to 100 billion frames per second. In order to capture the dynamic natural and physical phenomena, the device’s camera is customized to work with high-powered microscopes and telescopes. 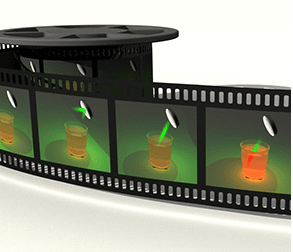 ​
Computational imaging technology is used to form actual images on a personal computer after acquiring raw data. CUP photographs an object after the camera lens has taken the photons from the object. The captured photons then pass through a tube like structure to the diminutive equipment known as digital micromirror device (DMD). The DMD, which encodes captured photons, has about 1 million micromirrors and each micromirror is about seven-by-seven microns in size. The micromirrors after encoding the image reflect the photons to the beam splitter. After the splitter shoots the photons to the slit of a streak camera, photons are then transformed to electrons. The raw data is stored by a charge-coupled device (CCD).This whole procedure takes place at a incredible speed and completes in just 5 nanoseconds. 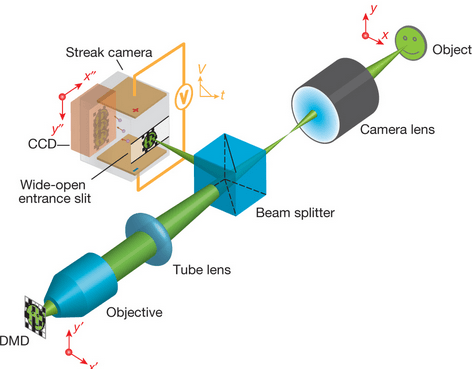 ​
The team has made movies from the images captured with single laser shots of four physical phenomena such as laser pulse reflection, refraction, faster-than-light propagation of non-information, and photon racing in two media.

The chief application area of this device is biomedicine. A movie is made to get single shot evaluation of fluorescence. It can be further used in astronomy for scrutinizing the time-related activities of a supernova that may have occurred light years away and forensics for reproducing bullet pathways. You can have a detailed look at the research published in the journal Nature.