@Ankita Katdare • 25 Apr, 2015
Currently, the high performance permanent magnets that are used in wind turbines as well as automobile engines make use of a rare earth element called 'Dysprosium' which is really costly and not available in abundance. As an alternative to this traditionally used material, a team of researchers from AMES Lab (U.S. Department) involving Karl A. Gschneidner (from Materials Sciences and Engineering), Arjun Pathak and Mahmud Khan among others, have given birth to a new magnetic alloy that used 'Cerium' which is a plentifully available rare earth material. The new alloy made up of iron, neodymium and boron co-doped with cerium and cobalt is 20-40% cheaper than the one containing dysprosium. Scientists at AMES laboratory believe that the new alloy holds potential for given serious competition to the sintered magnets that have been used for so many years.

The new alloy (which replaces dysprosium by cerium) has the ability to resist demagnetisation at high temperatures. Their experiments showed that the material performed better than any other material at temperatures more than 150° C. This means the alloy can be used as a permanent magnent in high-temperature applications with ease. 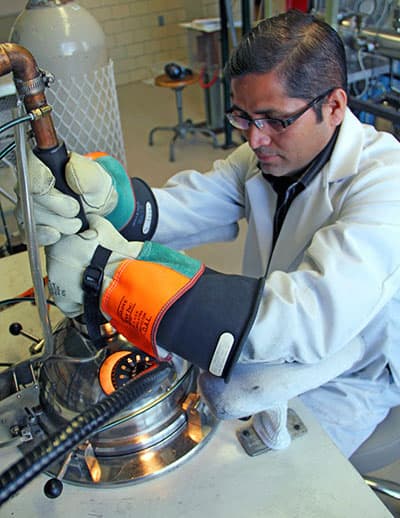 Image: Researcher Arjun Pathak arc melts material in preparation
for producing a new type of magnet.​
This is definitely not the first attempt to find a substitute for the permanent magnet used in our car's engines. Most experiments where cerium was used would fail because the alloy would lose its permanent magnet properties above a certain temperature. Therefore, when the AMES Lab team used co-doping with cobalt, they not only retained the properties, but also performed better.

Manufacturers currently rely heavily on dysprosium and the demand for the scarcely found material is too high in comparison to the pace of its recycling and mining. Therefore, finding an alternative alloy would be a great boon for our automobile industries.

What are your thoughts about the new research work? Share with us in comments below.

I have read that , best text book for propulsion is gas turbines , by many of my friends , what do you suggest me friends ?
3.7k views
Read More →
Archives

Micromax OS Will Be A Forked Android

Micromax Informatics aka Micromax, the Gurgaon based mobile and consumer electronics company is all set to develop its own mobile operating system. The new operating system is expected to power...
3.1k views
Read More →
Archives

Problem: Law of Parallelogram of Forces [Help me]

I'm solving some problems based on law of parallelogram of forces. I completely understand the concept and how to prove that 😀 But I've one silly question, look at problem...
9.8k views
Read More →
Archives

hi , anybody who reads this please tell me wher can i find jsdk2.0 servlet runner for download bcos my exams r nearing n i ve to practice my java...
3.2k views
Read More →
Archives