Why We Loved Orkut And Why It Had To Go? A CEan’s Perspective

Satya Swaroop Dash · Sep 29, 2014
Rank A3 - PRO
If you had an internet connection 7-8 years ago, chances are you were addicted to a website called Orkut. For most Indians it was their first taste of social networking. If you share my birth year, chances are that you were fresh out of matriculation and were missing some of your friends who were now pursuing their higher secondary education in other schools or colleges. Orkut became an instant hit with the youngsters as it was the next best thing after e-mail to be in touch. It was even voted as the MTV India Youth Icon for the year 2007. While Orkut was not as popular in countries like the US or UK, it had managed to capture the hearts of millions of Brazilians and Indians as you can see in the image below. 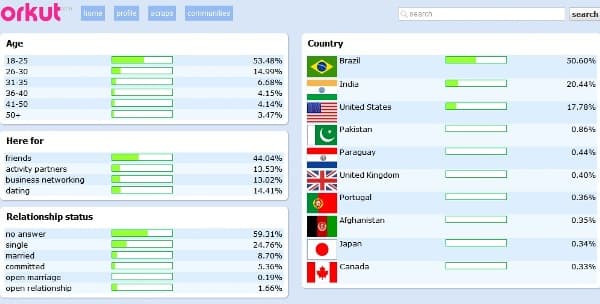 We loved Orkut because of its simplicity. We would like to point out that we are not talking about the new Facebook-esque layout but the old one. The old or initial layout of the website was easy to operate and you had complete control over who interacted with you and who was allowed to view your profile. Your profile page was reminiscent of how you would fill up a friend’s slam book. Adding details such as your political, fashion, humour and relational preferences helped likeminded people to discover you. You could add details about your favourite hobbies, TV shows, movies and books without having to ‘like’ or link to a page and the profile page was made in such a manner that it helped another individual learn more about you and did not have any ‘shared’ content.

Orkut had a trick up its sleeve to prevent stalking. The 'profile views' option let you know who had visited your profile. If you wanted to visit someone without letting them know, you had an option to disable the feature which also prevented you from seeing your own profile views. This was a double-edged sword that prevented stalking. Orkut was meant for communication and nothing more. Unlike Facebook, you did not have games or pages of celebrities, TV channels and websites that push unwanted content to your plate. If you were interested in a topic you were free to join a community to discuss it.

Why It Became Unpopular?

In the later years, as Facebook started to gain its user base by giving people a new taste of social networking, Orkut did something that it was not supposed to, it changed itself. Now this was a huge blow to the users who had come to love the website. For a few months it allowed existing users to go back to the old layout (new users were by default given the new layout) but it later removed the old layout altogether. Had it followed the “Be You” mantra, it would have still kept the loyalists thronging the site from time to time. 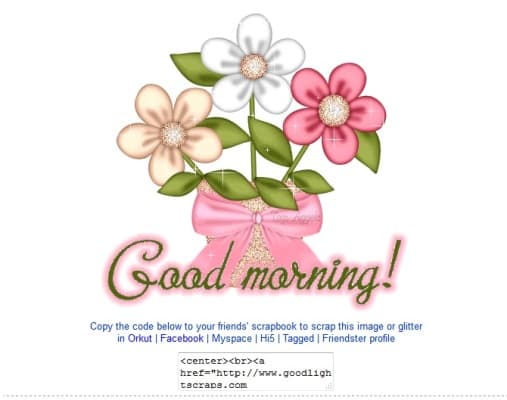 ​
The worst thing about this layout was the mass messaging feature with programmable scrap codes. With a single click your friends were able to repeatedly post ridiculous greetings that were mostly useless and consumed most of your usage and bandwidth. This was mass e-mail forwarding all over again.


C) Google Was Trying Something New

Google, the parent of Orkut at that time was pretty saddened by the dismal performance of Google Wave and started developing a new website called as Google+. With Google+ they applied some dirty tricks to get people to use it. Whether it was YouTube comments, or ‘Recommend’ you had to use Google+ login. They even added a new feature that would post your Orkut status updates on Google+.

By the years 2009 and 2010, Facebook was not just a site for the youngsters. It had extended to parents & grandparents. Even long lost relatives signed up for the service and they could not be bothered to keep another social profile on the side (aka Orkut). Google too was not interested in running the website because it was not a business product. Orkut was born out of its “20 percent” initiative. Under this initiative, Google allowed its employees to spend 20% of their time thinking and developing projects of their imagination. Google was not going to spend time and man power on someone’s hobby project that had a very few takers. At the end of June 2014, Google announced that it was shutting down the website for good on September 30, 2014. Until this date it allowed you to export your photo albums to Google+ and gave you two years’ time to save your Orkut profile, scraps, testimonials, & community posts to your computer using Google Takeout.

Orkut, at least the old one will be missed because people love simplicity (now, more than ever) and the rise of mobile messaging portal 'WhatsApp' is the burning proof of the fact. Social networks are not cool anymore as people are switching to messaging apps to keep in touch with one another. Therefore, as we look forward to the next big thing, let’s take some time to bid goodbye to an old friend.

Ankita Katdare · Sep 29, 2014
Rank A1 - PRO
Thanks for this hearfelt post, Satya. I was never an active member of Orkut. Created an account but never logged in. My friends were really active. They would talk about sending scraps and writing testimonials back then.
Somehow, the 'testimonials' were a lot used & abused like the 'slam book' that everyone shared when leaving school or high-school to share what their favorites were and what they thought about the slam-book owner. Everyone praised everyone else endlessly.

Is it still used in schools? 👀

Here's a video (Hindi + English mix), where people do One Last Login to Orkut before it shuts down forever. Check -