Jason Estibeiro · Dec 11, 2014
Rank C2 - EXPERT
Japanese multinational conglomerate Toshiba has launched the WT8-B tablet in India at an economical price of Rs 15,499. The tablet was launched on Wednesday especially as an item of online retail with it being available only on amazon.in. With its current price, the tablet is approximately 11 dollars cheaper in India than that in USA. The name of the tablet during its global launch back in May 2014 was Toshiba Encore 2 tablet. However, it is being endorsed in India as Toshiba WT8-B tablet. 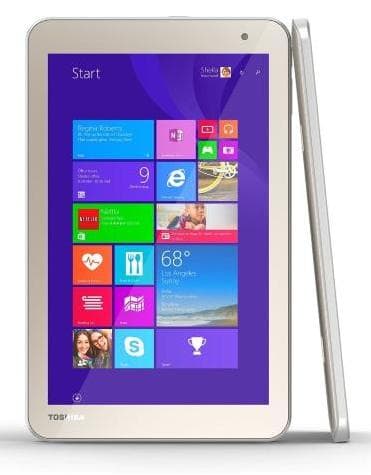 ​
The tablet boasts of the latest Windows 8.1 OS and an 8 inch 800x1280 screen display. The design is optimized for portrait mode and is easier to use even with one hand without interference of the hand with the speakers. Smaller and not easily decipherable details can easily be viewed using Toshiba Display Utility which will ease in the detail enlargement. One year subscription of Office 365 is included with the tablet with the Office activation imperative after 6 months of Windows activation.

The device weighs approximately 380gms and hence is easily portable. It is currently available in 2 colors: white and gold. The tablet has decent processing capabilities with its 1.33 GHz processor and 1 GB RAM. Additionally, according to the official Toshiba website, the device can work for up to 8.5 hours with a single charge. WT8-B has a good 32 GB internal storage which can be expanded up to 128 GB with the help of SD cards.


​
Besides all these features, however, the camera quality doesn’t seem very great. Although the device claims a full HD recording and autofocus, it has only 5MP rear camera without flash and 1.2MP front camera. It does not support sim card. It supports the standard 802.11 n Wi-Fi and has built-in Bluetooth but it doesn’t have much more options in connectivity like GPS or NFC. Remarking on the unveiling, the VP of Sales and Marketing Toshiba India, Mr Sivakumar said that the launch on the biggest e-commerce website in the world in a tech-savvy country like India will help Toshiba to obtain a strong foothold in the tablet category in India.