Kaustubh Katdare · Apr 4, 2013
Rank A1 - PRO
Samsung finally has began rolling out much awaited Jelly Bean (Android 4.1.2) firmware upgrade for Samsung Galaxy SII. It's been quite a while the phone got a big firmware upgrade since the last Ice Cream Sandwich (ICS) upgrade back in May 2012. But now, Samsung's decided to send a little more love to the old boy Galaxy SII and has began rolling out the Android 4.1.2 firmware OTA and via Kies - which is Samsung's proprietary software to manage the Samsung phones. Indian users had to wait a little longer because the first update to the phone was rolled out in Jan 2013 in Spain. But better late than never! Let's quickly have a look at the new features Indian SII owners will enjoy with this new update.

The most obvious, expected and noticeable improvement is in the performance of the phone. The firmware will make the phone more stable (thanks to project butter) and give a refreshing new look to the GUI (similar to what you see in the latest phone in the Galaxy series). The Jelly Bean would also bring features like Direct Call (just move your phone near your phone and the phone will dial a call to the contact that was on the screen), Smart Stay (phone stays on when you're looking at it, the screen doesn't go blank), Pop-Up Play (allows you to pop-out video player and put it anywhere on the screen). 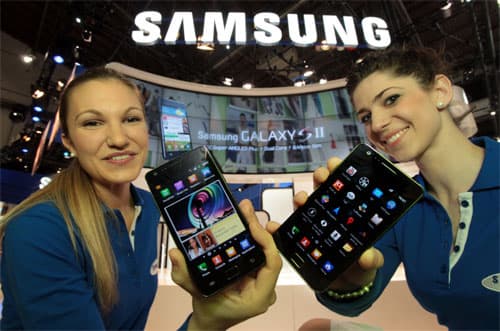 Other exciting features include dual home screen modes, an improved notifications system and more options to the buttons in the notification bar. The upgrade also packs Google Now, TouchWiz Nature, S-Cloud services and brings a few more features to camera. Of course, you won't miss out on a new lock screen.

What we're hearing from different sources is that the Samsung Social Hub has been removed because it's not compatible with the SII's hardware. This includes instant email & message notifications. Other apps which you might need like Polaris Office and Photo Editor are available for separate download from Samsung Apps center.

The update is being rolled out OTA aka Over The Air. We'd recommend hooking your phone to the nearest, trusted wireless signal update the firmware. If you choose your data plan to download, then you are likely to incur data charges. Those who're new to the upgrade process may note that OTA update is available through your phone's settings -> About > Software Update.

Other method to update the phone would be through Samsung Kies. Get the latest copy of the Kies software from Samsung's official website and install it on your computer. Plug-in your phone via USB and Kies will notify you that a new firmware version is available. Start the upgrade process and be aware that it may take several minutes before the firmware is downloaded and installed on the phone.

Don't forget backups: It's strongly recommended that you should backup all your phone's data because if the upgrade fails, there are high chances that you might end up losing your contacts, music, files, videos and apps. Use the Kies software that offers a very simple backup process for your phone.

Finally, we'd like to thank Samsung on behalf of all the Samsung SII owners. You kept your word of not ignoring the earlier models as you keep launching the next wave of phones. Posted in: #Gadgets
0 Likes
@ A2A Reply

[Prototype] · Apr 6, 2013
Rank B1 - LEADER
Updated and liked it. Quite a lot of new features, some are useless but many are useful. I could feel a noticeable difference in touch, that's for sure. Its lot better than it was in ICS.
0 Likes

[Prototype]
Updated and liked it. Quite a lot of new features, some are useless but many are useful. I could feel a noticeable difference in touch, that's for sure. Its lot better than it was in ICS.

Any idea on how big is the download?
0 Likes

Kaustubh Katdare
Any idea on how big is the download?

I did it via Kies. Not exactly sure, but I would estimate it wasn't much bigger. May be about 300 MB or so because it took like an hour and I am on 2 Mbps connection. I was doing parallel downloads as well so for sure it wasn't extremely large.
0 Likes

lal
Did you find any improvement in battery life with this upgrade?

None that I noticed. I, from the start ran my phone on lowest brightness and power saving mode on. Battery life was good for me from the beginning so I didn't noticed any difference in battery life. All I can say that, the things didn't went bad as few people reported.
0 Likes

Anoop Kumar · Apr 7, 2013
Rank A2 - PRO
If you have rooted Phone and wanted to get official build. here is the link from XDA.
download and flash via ODIN.

ianoop
If you have rooted Phone and wanted to get official build. here is the link from XDA.
download and flash via ODIN.

You don't need root for flashing via Odin.
0 Likes