Kaustubh Katdare · Jun 3, 2013
Rank A1 - PRO
If you are a busy businessman who doesn't want to wast time (and don't mind spending money to save time) then you might just look at the beautiful beast called Saker S-1. It's military jet inspired personal jet that aims to reach 0.99 aka almost equal to the speed of sound. The company says that it will cruise at a speed of Mach 0.95 and reach the top speed of Mach 0.99. This two seater plane will shave an hour off a 1500 nautical mile flight (approximately 2778 km) as compared to its closest competitor. 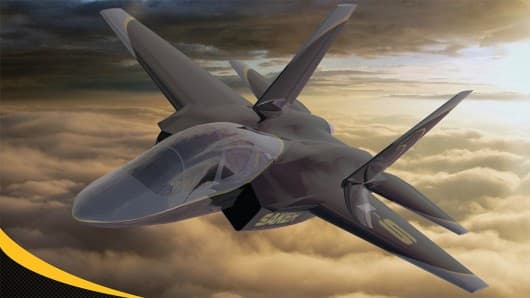 The craft has a wingspan of about 27ft and length of about 40.5 ft. It's 15 ft high and has empty weight of 2495 kg. The S-1 can carry maximum payload of about 2720 Kg. Two Williams FJ44-4 engines will power the aircraft and will serve for about 500 hours before needing an overhaul. The company says that the operational cost is about US $2 per nautical mile. It's also the aircraft that uses 20% lesser fuel than its competitors.

Gurjap · Jun 9, 2013
Rank C1 - EXPERT
What the hell? Just because you ripped off a Raptor F22 Lockheed Martin airplane doesn't mean it's going to perform like the real thing. Also, the F22 cost $66.7 BILLION in a public disclosure, meaning actually it probably cost $500 Billion or more to develop. I don't think any other entity than the US Government has that kind of money to spend on airplane R&D, especially not Saker.

It appears the marketing department of Saker was playing a bad joke on the engineering department. Executives would never splurge on excesses such as these: give them a luxurious Learjet any day if they can afford personal or business individual trips. And what's with the runway length tidbit? Who cares? Does the plane come with an aircraft carrier as well?

I sincerely don't think such a plane, if it could fly, would have a market of more than a dozen people.
0 Likes