Chaitanya Kukde · Dec 1, 2014
Rank C2 - EXPERT
The iOS 8.2 beta was released just 13 days ago. A Chinese based team of hackers called TaiG have already released the jailbroken versions for both, the iOS 8.2 beta and the iOS 8. MuscleNerd of Team Evad3rs, the non-Chinese hacker partners of the Chinese outfit took to Twitter to announce the release. The Twitter statement said:

Looks like TaiG just released a jailbreak for 8.1.1 (and 8.0, 8.1, 8.2 beta). Best to wait a few days just in case.​
The source, Redmond Pie said it had tested the release and found it to be working on these devices: iPhone 6, iPhone 6 Plus, iPhone 5s, iPhone 5c, iPhone 5, iPhone 4s, iPad (2, 3, 4, Air, Air 2, mini 1, mini 2, mini 3), iPod touch 5. TaiG had famously issued an iOS 7 jailbreak last year's Christmas Eve and presented a plethora of pirated, cracked iOS apps via their app store which caused an uproar in the jailbreak community. Currently, the TaiG jailbreak is available for Windows only. The availability of the Mac release is unknown. 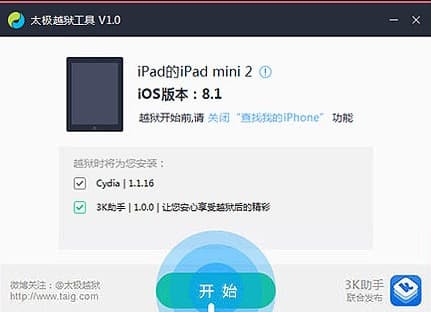 ​
The Cydia package installer from Team Evad3rs will be bundled along with jailbreak release. The TaiG iOS Jailbreak can be downloaded from Taig.com.