Kaustubh Katdare · Sep 29, 2012
Rank A1 - PRO
The Facebook fans with the over-priced devices from Apple may head over to the iTunes store in your macbooks or iMacs and update the facebook messenger app to version 2.0. The social networking giant has released the latest version of the app in the itunes store few hours ago. Facebook had promised an update for the iOS devices after launching it for the Android platform a few days ago. 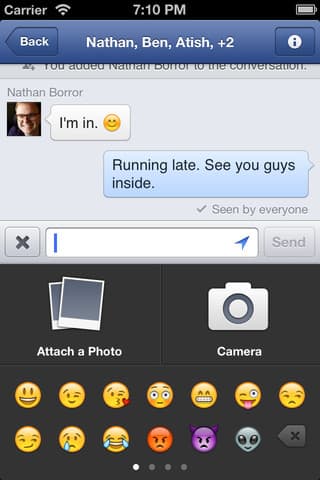 Facebook's engineers have reworked the GUI for the conversations. Now the chats with your contacts look a lot like text messages. I hope you will like the bubble-style look of the conversations. The next significant update is that swiping left gesture on the conversations screen will reveal your friends-list. You can now adjust the ranking of your friends in the list and make the friends you message the most to appear on the top.

You can now expect the next update in about a month's time (or maybe a little longer than that). Both android and ios versions are keeping pace with each other. If you happen to download the app, do not forget to post your review.