@Ankita Katdare • 14 Jul, 2013
Adding up to the interesting list of the premium hatchbacks in the Indian car market, BMW India seems to be all set to launch the BMW 1 Series in September 2013. After an official declaration about the same came from Mr. Philipp Von Sahr, President of BMW India, the folks over at Autocar India recently spotted the car on the Indian roads. Directly in competition with Mercedes A Class that was launched over a month ago in India, the BMW 1 Series cars sure in for a ride. Being assembled at BMW India's Chennai facility via the CKD (completely knocked down) route, this hatchback series is going to be available in range of engines between 1.6 litres to 3.0 litres for the petrol variants and 1.6 litres to 2.0 litres for diesel variants. The new 1 Series is going to become the 3rd car from the Bavarian car maker to be launched in India this year.

Being the smallest and the least priced car from BMW India, the 1 Series cars would be powered by a 2 litre turbocharged diesel engine with max power-torque figure of 184Bhp-380Nm and a 2 litre naturally aspirated petrol engine that has a max power-torque figure of 150Bhp-200Nm. The engines will come mated to an eight speed automatic gearbox. This current generation, revealed at the 2011 Frankfurt Motor Show, features a 'love it or hate it' design language. 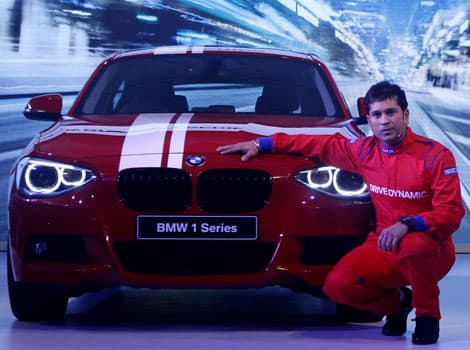 Going by the initial response for the A Class, which saw over 400 bookings within weeks, there are many Indians who don’t mind coughing up over INR 20 lakhs for a hatchback, provided it has a particular badge on the grill. But it also has to be taken into consideration that both BMW and Audi outsell Mercedes in Indian car market. Speaking of which, we haven't heard any confirmation from Audi India about plans to bring in the Audi A3 hatchback. And there's not-to-forget Volvo V40 Cross Country too for the fierce competitive market.

From what we are reading, BMW India has already geared up and started the marketing initiatives for this upcoming car. Under this initiative, ten ‘lucky’ winners would go on a fully paid trip to Germany and get to drive the 1 Series along with cricket maestro Sachin Tendulkar and Indian FIA GT driver, Armaan Ebrahim. So, who all are looking forward to this launch? Share with us your thoughts in comments.

Update: As expected, the BMW 1 Series Launch in India has happened at the hands of Sachin Tendulkar, who needs no introduction and Indian FIA GT driver, Armaan Ebrahim. "The breathtaking agility and sophisticated functionality make it the perfect car for people who are passionate about driving and want to make their mark," said Philipp von Sahr, president, BMW Group India. "A genuine eye-catcher with a real presence, the all-new BMW 1 Series will definitely stir up the premium car segment."

Speaking at the launch Mr. Tendulkar said, "As a car, I like the entire package. The whole car is beautiful. It is not just the size but also the styling, like putting the 3, 5 and 7 series together in this wonderful package called the 1 series. It is fantastic. I am looking forward to get this car and zip around Mumbai."

The available variants are: petrol (BMW 116i) and diesel variants (BMW 118d, BMW 118d Sport and BMW 118d Sport Plus). The car is priced between Rs 20.90-29.90 lakh. Let us know what are your opinions of the sparkling new car in the Indian market.
@Sarathkumar Chandrasekaran • 15 Jul, 2013 Its looks stands between a SUV and a sedan.
But I dont think BMW can complete its target on youngsters.
Features are good and impressed with 8 speed transmission.A very good power generating engine with turbocharger makes it elegant.
Those who look for performance and features look for the monster from BMW.
@Ankita Katdare • 28 Aug, 2013 And here is some news. BMW India will launch the 1 Series in India on September 3. In line with this announcement, the pre-bookings for the 1 series hatchback have commenced and those interested can call 1800 102 2269 to book the car.

Here are some of the specs you can look forward to -


@Nayan Goenka • 29 Aug, 2013 Is Volvo highly active in Indian market. I only saw one Volvo car in my life in Mumbai and it didn't seem that attractive. BMW and AUDI have captured the elite class market in India is for sure. The logos speakfor themselves. this series for example if rolls out at cheaper rates than the previous BMWs and comes at rates <25lacs INR, then it will surely be a boom for their sales. Sooner or Later, BMW and AUDI will be under think-to-afford range for the people.
@Sarathkumar Chandrasekaran • 01 Sep, 2013 At a price range of 20lackhs I will go for BMW between BMW and Mercedes.Features seems to to quite good for this price tag .More the varients mre tge chances of BMW to attract the car lovers.Both diesel and petrol gives the customer to select from two beasts.As I have already stated Look only bothers me.It doesnt fullfill the sedan criteria.It partially looks like a small innova and BMW should be carefull while they select consumers in India.Two days to go for launch as said by Ankita.So lets wait and see what BMW has to offer us.
@Ankita Katdare • 04 Sep, 2013 The post has been updated with recent developments.
@prahu mac • 04 Sep, 2013 i think BMW is trying to compete with mercedes here!!!!!!
@Rohit Nair • 05 Sep, 2013 Surely its a tuff competition with audi at this price and just dashing down mercedes......
5.9k views

Here are some topic i came across while i was searching topic for myself. i still have to choose one. any suggestions for me? 1. Utilization Of Sludge Gas 2....
7.2k views
Read More →
Archives

Hi, we hav started our construction recently with load bearing method and the foundation work is just got completed. But now due to some reasons we want to convert this...
7.3k views
Read More →
Archives

Amazon.in - the Indian online store for Amazon has launched a new Android app to browse through its online catalogue and buy stuff from Amazon right through your smartphone. Everyone...
16.9k views
Read More →
Archives

How to prepare for campus placements: Preparation Tips &amp; Tricks

The campus placements season will start in the next few weeks and I hope all the CEans who're eligible for campus placements; the ones who are in third / final...
136.8k views
Read More →
Archives

Project Ideas In Internet Of Things Useful To Society