The following are the modules in the system : 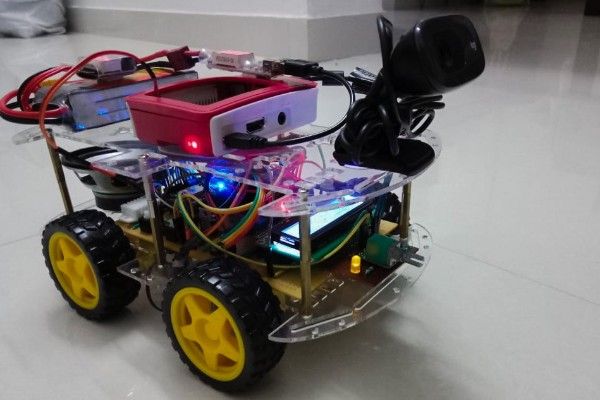 • Movement of the robot based on the commands from the server.
• The temperature and humidity of the area is also displayed in the LCD by the DHT11 sensor.
• Each of the movements are executed by the driver shield that is connected to the NodeMCU unit.
• The 5V of power supply from the NodeMCU micro controller that is sufficient for the whole circuit.
• The movements are also displayed on the 16x2 LCD display unit each time when a command is issued and when the rover performs the action.

• Program in python language using open CV library and tensor flow on raspberry pi.
• Detecting the object given direct via programing by camera.
• Datasets are preloaded on the file and the extraction is made from the preloaded images.
• Utilization of open source equipment and that chips away at the premise of visual information caught from an ordinary camera which has a reasonable lucidity.  z

• This robot has multiple features which will give more security to any place and viewed on a mobile phone/computer.
• There are varieties of sensors for analyzing the current situation, a lot more can also be added according to the need.
• Everything can be controlled and monitored using mobile or a computer through the internet from any part of the world.
• The Voice Command System has an enormous scope in the future like Siri, Google Now and Cortana become popular in the mobile industry.