We made project drone from scratch, which is custom made drone that deliver package payload ranging from 100 to 500 grams

Drone based delivery systems are undergoing a lot of development lately and are seen as a cleaner, greener and more efficient alternative to ground-based transportation networks for small and light payloads. The proposed system utilizes drones that switch packages autonomously between themselves and thus form a network. The network utilizes docking stations which are spread across the available urban terrace spaces. We believe the proposed network can significantly accelerate delivery times and reduce the costs associated with the delivery. The proposal also contains a brief description of a standard for use with the proposed network. Scalability, modularity, economy and worst-case performance have been kept as design factors while designing any system component. Also, the sub-systems have been analyzed and designed in SolidWorks. The current issues with drone deliveries are safety, cost, legal issues and the technology for making the drop. Companies such as IBM have patented systems that can exchange packets while in the air. Zipline uses an aircraft (fixed-wing) to physically drop packages on bare ground because an aircraft that has taken off, draws less energy while flying but cannot perform Vertical Take-Off and Landing (VTOL) like multi-rotor UAVs (Unmanned Aerial Vehicle). In India, the government has recently amended laws that allow flying of multirotor aircrafts for a distance of 200 feet above sea levels for micro category of drones and a lot of other such improvements but safety is still an issue owing to which, the laws are also still quite restrictive. Current work focuses on developing the technology required by drones to autonomously lift and drop packages. This requires the drones to locate the packages, identify them from among many other similar packages and then orient itself according to the package in order to lift it. Once a solution to the above problems is found, it is to be made modular, stable and also scalable. The solution is being developed in a very simple and economic way so as to make the system scalable. 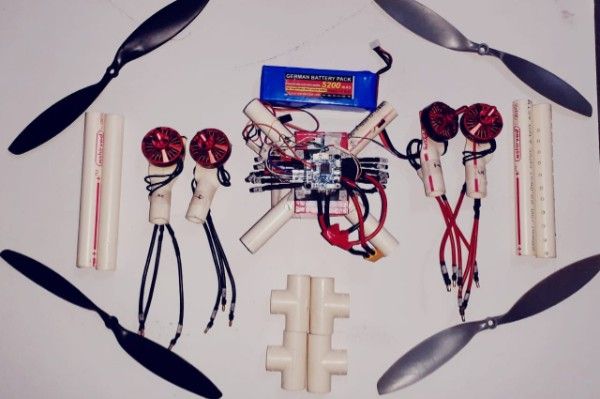 All the components from all drone component and two different charger,extra propeller and report documents and presentation.