This project will suck the garbage and it will put onto its bin. It can be also used in beach sides.

Development of Robot for Garbage Monitoring and Management deals with the Robot mapping which consists of using a robotic system to create a cartographic representation, or map, of an environment. The mapped environment may have different shapes, sizes, inclination, obstacles, it may be static or dynamic, and it might be previously known or not by the robot. This heterogeneity makes the mapping task a challenging one, but its outcomes are particularly useful.

With a map, actions such as rescue, security, cleaning, and construction can be meticulously planned and executed, boosting the overall efficiency and accuracy of the task. The autonomous robot described in this paper is capable of autonomously gathering data of a previously unknown environment.

Since it is autonomous, the robot does not need human input in its operation.The computer core uses this data to create a 2-D graphical map of the environment. The external state of the robot is perceived using ultrasonic sensors.

Additionally, to accurately keep track of its position, the mapping robot uses a gyroscope sensor and a rotary encoder. An image processing method was developed to recognize beach line automatically for the applications of our autonomous beach cleaning robot. By converting the color image from the RGB to the HSV coordinate, using morphology operations and the least square method, the beach line is recognized successfully even in the presence of people.

The recognition can be accomplished typically in about one second and hence can be used for outdoor real time robotic applications. 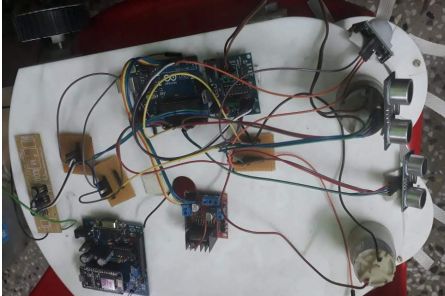