NASA's Opportunity rover facing a deadly storm on Mars. Will it survive?

NASA's Mars exploration rover Opportunity is caught in a massive dust storm which could kill it.

The Mars exploration rover 'Opportunity' is in a low power mode due to a  growing dust storm on the red planet. All Scientific operations have been suspended to conserve power. NASA reported that by June 6, the storm had expanded to more than 18 million square kilometers, which is greater than the area of North America. The storm was first detected on June 1 by the Mars Reconnaissance Orbiter. 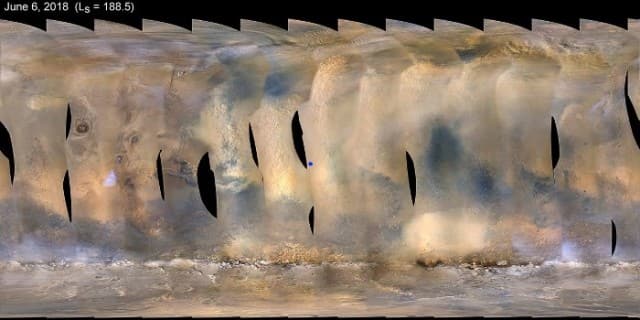 Global map of Mars shows a growing dust storm as of June 6, 2018

The dust storm is particularly lethal for the rover as it prevents sunlight from falling on the solar panels installed on it. Power generated from the solar panels is used for charging the batteries which keep Opportunity alive. It was doubtful if the rover could withstand such a high-intensity dust storm but a signal received from Opportunity on June 10 confirmed that it is still functioning and has some juice left in its batteries.

It is imperative that the heaters installed in the rover remain operational while maintaining the minimum charge in batteries. Keeping in mind that Opportunity is approximately 15 years old, it is uncertain whether it will be able to battle the storm and keep itself alive as the storm continues.

The rover has faced dust storms previously such as the one in 2007 which had an opacity level of around 5.5. However, the current storm is the most severe storm Opportunity has ever faced. It has an  opacity around 10.8. Although no one can comment with certainty about the future of Opportunity, luck seems to favor the tiny rover which has kept it alive till now even though its designed mission life was only 90 days.

Amol Agarwal
Amol Agrawal is with CrazyEngineers since May 2015 and loves to write about gadgets, science and engineering.